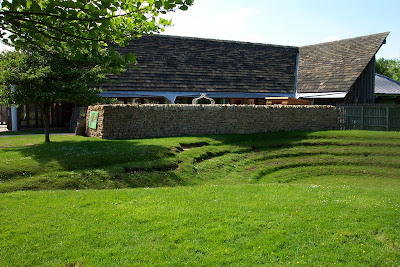 I recently received an update from Brian Wood about the completed workshop wall that Andy Geekie worked on in Yorkshire, an event which Andy wrote about and I posted on Thinking With My Hands last Thursday. Very interestingly this dry stone wall that was built by students in a public place as a permanent feature. Here is the article that Brian, of the Yorkshire Dry Stone Walling Guild, sent.

- This wall was built in April/May 2010 as a rather different training exercise by a 40 strong team combining tutors and members of the Yorkshire Dry Stone Walling Guild, with student groups attending three dedicated training courses. One student, a member of the Dry Stone Walling Association (Canada), came as a part of his UK holiday. The job was commissioned to enclose a new plant sales area at the Visitor Centre to the World Heritage site of Fountains Abbey near Ripon, Yorkshire.

The finished wall is 23 metres long and stands 1.82 metres high from base to top. Built in the traditional Yorkshire manner with projecting through stones, it contains about 60 tonnes of newly quarried sandstone supplied from Ravensworth Sandstone Quarry near Scotch Corner. The task took ten days and some 500 man hours to complete.

A small detail not visible in the photographs is a built in duct under the wall to carry rainwater from the building roof to a future water harvesting tank in the amphitheatre depression outside the wall. This feature had to be bridged, as can be seen, in the early phases of the construction for safety reasons and to help with the problem of reduced access height on that side. It was removed as soon as the wall had advanced beyond, it actually made access to the wall rather limited as well.

The National Trust’s structural engineer was concerned that the excavations for the footings seemed inadequate, simply prepared as is usual for a dry stone wall. We reassured him that this method has served such walls satisfactorily for centuries and also calculated the ground loading at the base of the wall. It was remarkably low with a figure of about 2.5 pounds per square foot; about the same as that exerted by a 12 stone man on his feet!!

There were then no further concerns and the project proceeded with his blessing.- 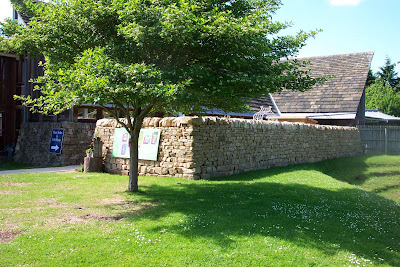 Posted by John Shaw-Rimmington at 1:38 AM