Space for a new year 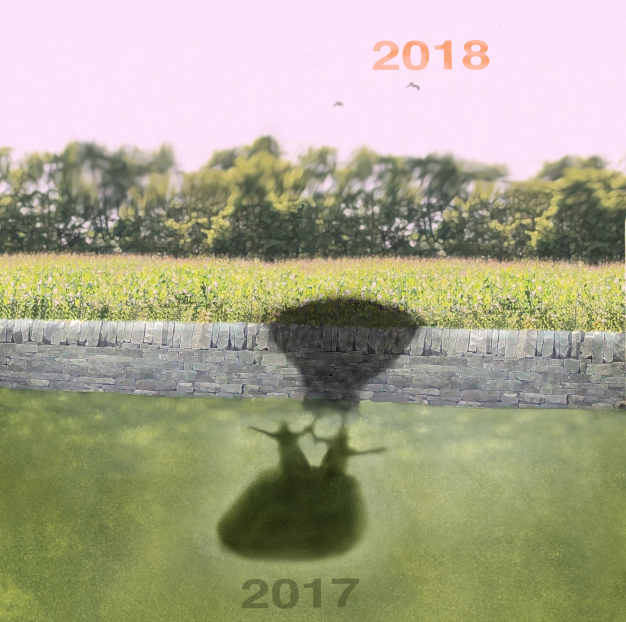 It's so hard to do nothing – to leave space between events.

I was a mason who once filled every space left between stones, with cement

I’m a waller now.  No cement.
But
I still have to remind myself to allow space between things rather than just impose tight fits.

Tight fits are fine except they imply
space is wrong.
But space is what gives everything proportion and perspective

Why limit the space, or restrict space to too many rules

Entering into a new year allows us put distance between –
to leave an old year behind.

Let there be a conversation, a breathing space, some room for movement.

We are not cemented to the past.

We are not locked into a concrete future.

Enjoy the ride, and the spaces.
Posted by John Shaw-Rimmington at 3:30 AM 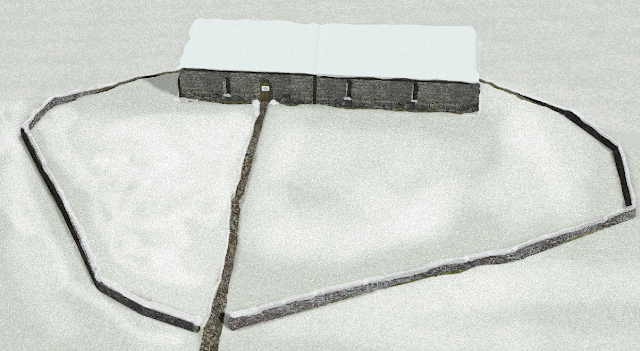 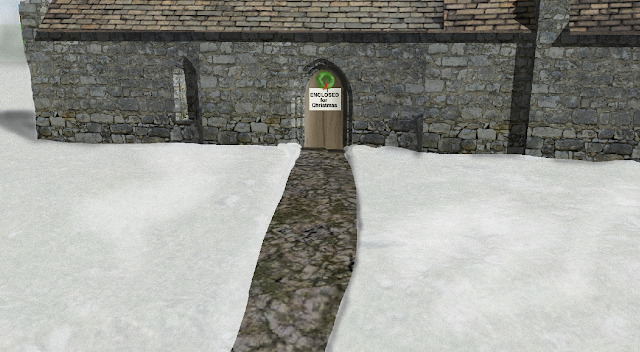 Merry Christmas to all of you!

See you in the New Year. 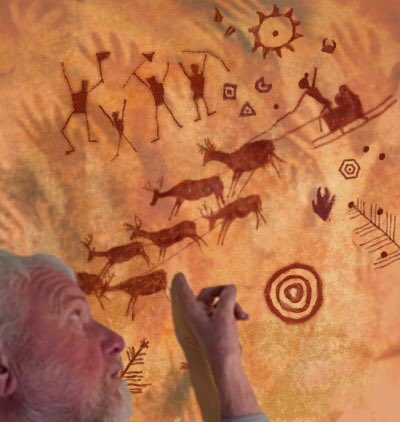 Discovering evidence of the true origins of the Holiday tradition, ancient rock paintings reveal ritualistic veneration of the sacred ‘Celestial Sled’ pulled by prehistoric reindeer, transporting a sort of benevolent, astrological, Neanderthal figure who appears to be dropping off gifts of fire, ceremonial headgear, rock candy, festive flint ornaments, and early prototypes of the wheel .

Obviously this tradition pre-dated the Bronze Age and so the ‘Santa’ figure was still only called Saint Nickle-less, until ways of making such alloys as copper, tin and nickel were discovered.

Gathered round the fireplace. 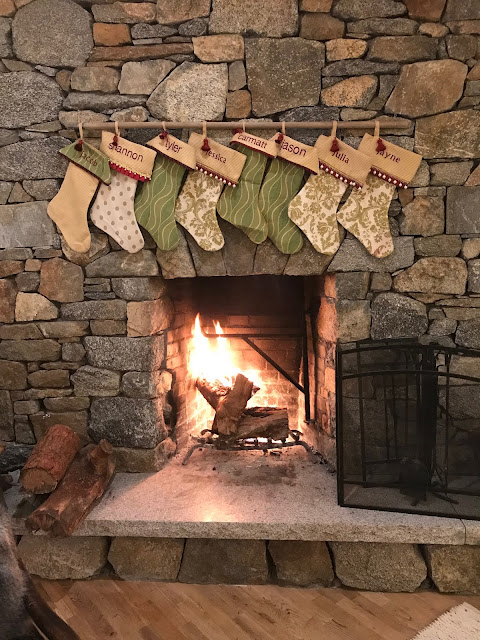 This will be the first Christmas away from home for the Stones.

They had to give up their beautiful place high up in the Southern Sierra Nevadas last January when the heavy California rains made their old dwelling place too unstable, prompting them to panic  and leaving everything behind, quickly escape to the valley below in search of safer ground.

They spent a soggy night standing in the rain by the side of the old Kern Canyon road.

In the morning, friends of ours driving by in their truck saw their plight, stopped and picked them up and kindly invited them back to their house to stay, until they could find some better arrangement.

It turned out that they all got along so well that not long after that our friends asked us to come and build a permanent place for them, right in their house.

We spent a week fixing up a corner of their livingroom just for them.

When the Stones finished moving in, you could see they loved their new place, they were quite content to stay there permanently . It did look cozy and warm and most importantly 'dry'.

All the family will be home for the holidays this Christmas and the Stones too will be celebrating nearly a year of having their lives put back together. Im sure they'll enjoy being huddled around the fire, looking out into the living room and appreciating their wonderful new family arrangement.

Walling in a Winter Wonderland 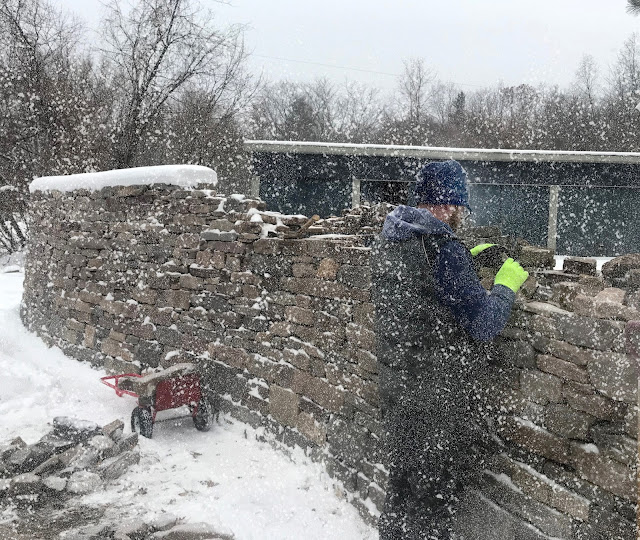 Posted by John Shaw-Rimmington at 10:24 AM 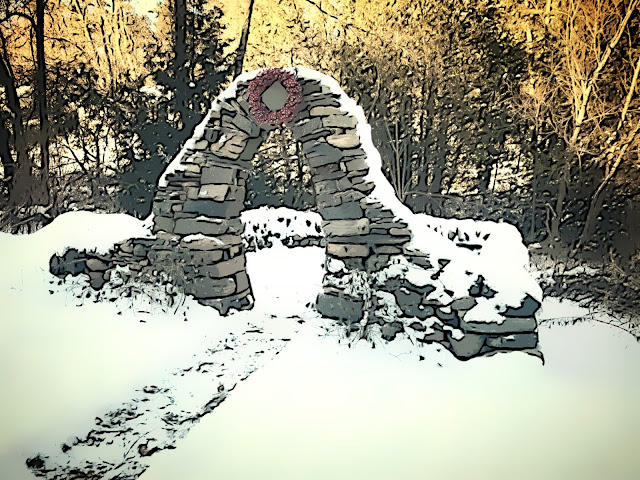 Enhancement is different from enchantment. It's not imaginary. It's why certain lenses and filters can work so well. They help us recognize a beauty we had not noticed before, but are ready to see and appreciate. They add focus or perspective to, or provide a different colour of light from, what otherwise seems to be just a common view of things. This all has to do with vision.

But enhancement is not just confined to seeing.
There are similar positive influences, somewhat like filters, that can be applied to life and experienced by all our senses. How we feel is only how we think we feel. There is so much more.

Our ability to be sensitive to hues and colours not yet seen by the eye, extends to our capacity to feel more than we know, and so be more open to being enlightened.
This is all simply an augmenting of, or extracting more from, each 'moment', and thus 'seeing' various aspects of life more vividly.

Like a kind of sensory aesthetic air conditioner- we can be extracting the 'cool' ( all that is genuinely attractive), from the ambient outside temperature of the world around us, and introduce the benefit into what may otherwise be a somewhat stifled consciousness.

Enhancement is more than potential. The seeds for it are always there, and need not be dormant. The change they provide like a metaphysical lenses or filters, can make all the difference to our garden, even in the coldest of winters.
Posted by John Shaw-Rimmington at 4:30 AM

Beloved stonemason Thea Alvin and her partner Michael have just suffered a horrible fire in their house and barn. If you are inclined to help please donate at the You Caring link below.

A fire destroyed a barn that housed an art gallery on Route 100 in Morristown. Thea Alvin, who owned the property and the Rock, Paper, Scissors gallery, says the fire destroyed hundreds of thousands of dollars worth of art by her partner and herself, and a herd of goats was killed, but no people were injured.

Morristown artist Thea Alvin says she and her partner, Michael Clookey, lost hundreds of thousands of dollars worth of art when their barn burned down early Monday morning.
The fire broke out at about 3 a.m. Clookey woke up about then, looked out the window and saw the barn was on fire, Alvin said.
“It was all on fire,” Alvin said.
Six people, including Alvin and Clookey, were at the house when the fire broke out — she rents out space in the farmhouse on the property.
Six fire departments — Elmore, Hyde Park, Johnson, Morristown, Stowe and Wolcott firefighters came to fight it, and Morristown EMS responded too.
“The barn was fully involved” when his firefighters got there just after 3 a.m., said Shawn Goodell, Morristown fire chief. They didn’t leave until about 11 a.m.
Saving the house was the Morristown Fire Department’s top priority, since the barn was already destroyed when they arrived.
There was just a small space between the barn and the house, and fire crews in self-contained breathing apparatus went into the house and between the house and the barn to keep the fire from spreading.
“Quite a bit” of the house will be salvageable, Goodell said.
“There was a lot of fire when we first got there,” said Brad Carriere, assistant chief of the Hyde Park Fire Department.
Carriere says he was driving the department’s tanker truck to the Irving gas station on Route 100 to retrieve more water.
Goodell estimated 30,000 gallons of water were used to fight the fire.
None of the department’s hoses froze, but some people had troubles with their air masks freezing, Carriere said.
“In these temperatures, the biggest thing is our tanker trucks freezing up — the valves in the back after we empty the trucks — or our nozzles freezing up, and the guys getting wet in their gear and freezing. They get exhausted a lot more,” Carriere said.
Temperatures got down to around -3 Fahrenheit, Goodell said.
Mark Walker, first assistant chief of the Stowe Fire Department, says his department got there at about 3:10 a.m.
“It being as cold as it was this morning, it was a little tough. They made a good call on getting a lot of water on there quickly, and keeping it away from the house as much as they could,” Walker said.
The key was to keep water flowing, he said.
“Don’t stop, if you can. Once you get water flowing, you can have a continuous flow of water to keep it so it doesn’t freeze up,” Walker said.
“I think it went well. We did what we had to do to save what we could. Morrisville did an excellent job organizing,” he said.
Goodell thanked the mutual aid partners, as well as Morristown EMS and the American Red Cross.
The cause of the fire is being investigated by a Vermont State Police fire investigation unit.
By 8:30 a.m., the fire crews had mostly dispersed, leaving Alvin, the left side of her face smarting with a burn, to survey her home, shell-shocked.
In addition to Clookey's sculpture and pottery, priceless collections of antiques were being stored in the barn, and all were lost, Alvin said. Some had belonged to family members.
Alvin also lost an entire herd of goats, as well as several chickens, in the fire.
She’s lived there for 20 years, and the property is the site of some of her ambitious stonemasonry, including a few writhing and twisting stone arches.
The barn that burned down was built in 1810, and has served as a gallery for Alvin and her partner’s work, called Rock, Paper, Scissors. It opened in 2014.
Alvin says she feels lucky not to have lost her whole house, although she’s saddened by the loss of her goats. The two chickens that survived will have to find new housing. Alvin and her partner plan to stay with a friend for now.

Thea Alvin is something of a local treasure. She mined a career out of working with stone, beginning when she was 16 and apprenticed with her father. She dropped out of high school shortly thereafter, determined to chisel a living out of the rocky Green Mountains.
Her work has been featured in the New York Times and O Magazine. She’s spent several summers working in Italy with groups of volunteers to restore stone buildings in disrepair.
She’s built a primitive stone castle and rock wall for an eccentric who owned a home on a hillside in Vermont.
Most recently, she helped students at Stowe Elementary School construct a rock wall and arch.