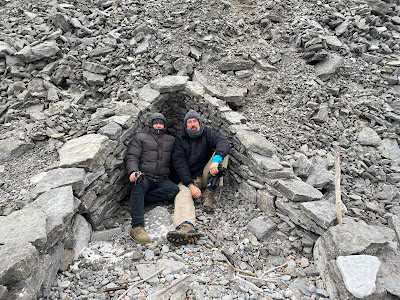 If you walk far enough along the shore of Lake Ontario where we live, you come to a long section of a crumbly cliff made up of many loose chunks of rugged weathered limestone

It's looks like it was all dumped there from above where the railway line comes troublingly close to the cliff edge. Perhaps train loads of rocks were tipped over the lake side in an attempt to shore up the shore . In any case the area below makes a great place to experiment with different building methods and/or just playing with stone ideas. You just have to be careful not to cause an avalanche !

This is where the germ of the 'the dry stone ship crashed into the shore'( or perhaps less violently,  ' the ship run aground ') idea came to me.

I'd been trying out different techniques for building the cocoon installation I had been starting to think about doing sometime around January 2021. The opening I had now started to dig into the side of the cold rocky cliff supplied me with lots of stones to then build up the sides .

The resulting shape began to look less and less oval looking ( cocoon-like ?) and more pointed , more like a gothic portal opening, or maybe a ship's prow.

I built into the cliff as far as I dared and extended the walls of the boat shaped opening with the newly acquired stones, towards the water's edge. The resulting space provided a shelter from the wind and a comfortable resting place.  This playful shore project was the beginnings of thinking about designing (and building permanently) not just a cocoon now  but rather some kind of boat shaped dry stone portal thing .  Craig and Brian came back with me later in February to add more stones to the gunnels and then sit comfortably out of the cold wind while I took a photo.

Posted by John Shaw-Rimmington at 8:29 AM