While I was away out west I had the opportunity to work with other professional masons on a structure Patrick McAfee designed based on historical stone buildings he has researched in Ireland. This was one of the projects we worked on at the 2014 StoneFest in Seattle. Here below are the drawings and plans he sketched and photos of the work at several stages of completion on this unique Irish Stone Church. 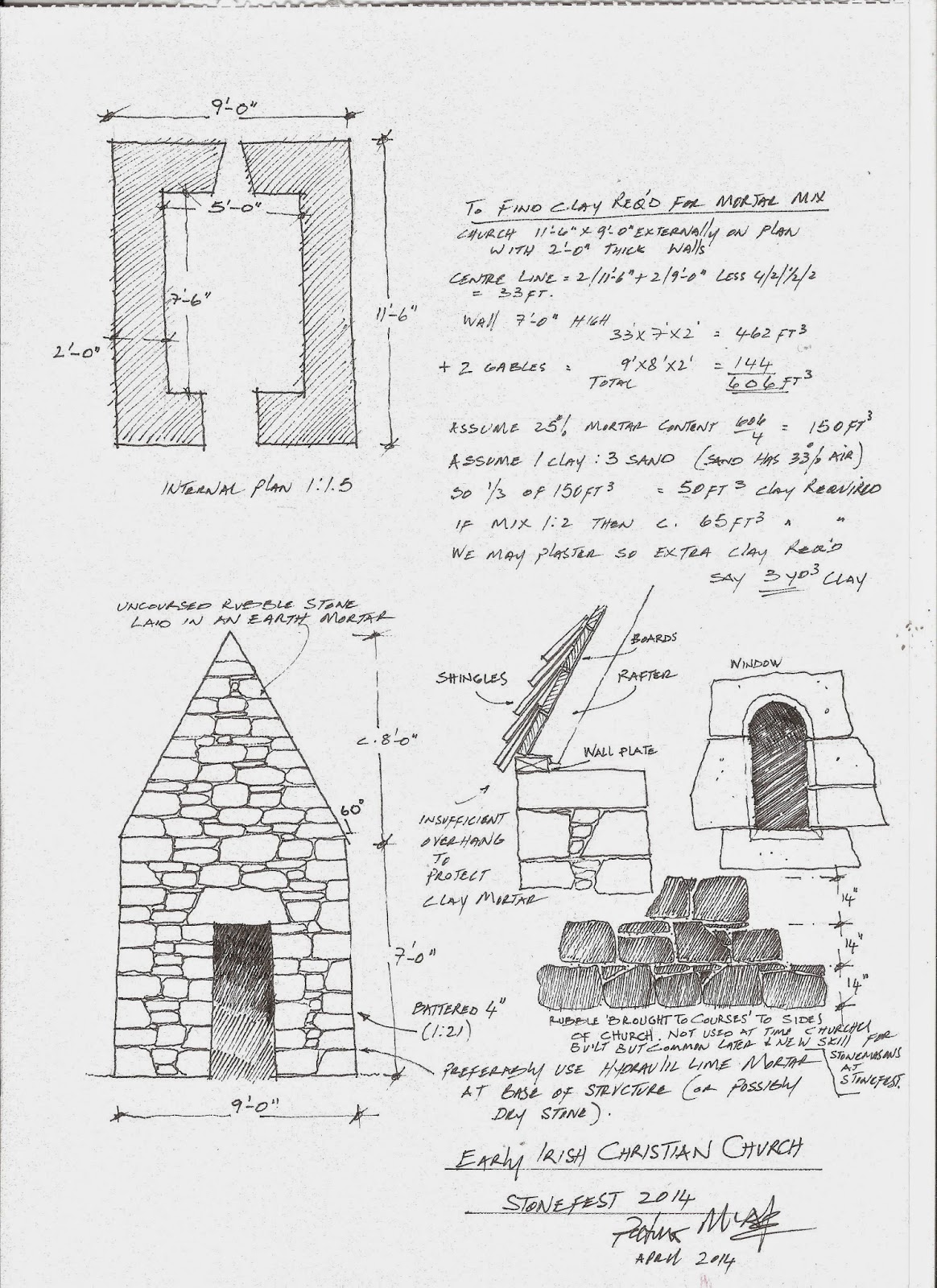 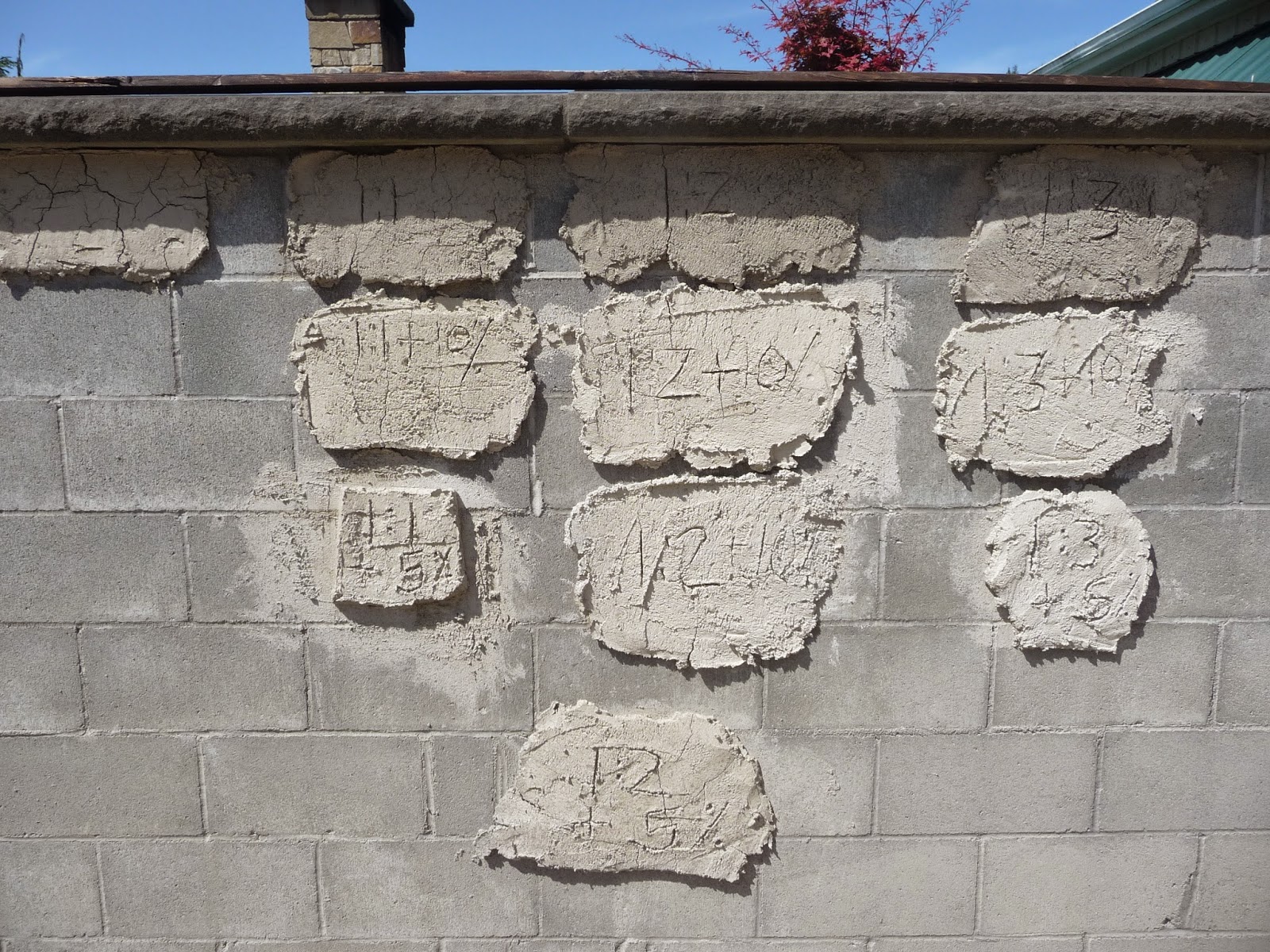 Mortar trials -
Patches of different mixtures of lime mortar are tested for setting strength and hardness. 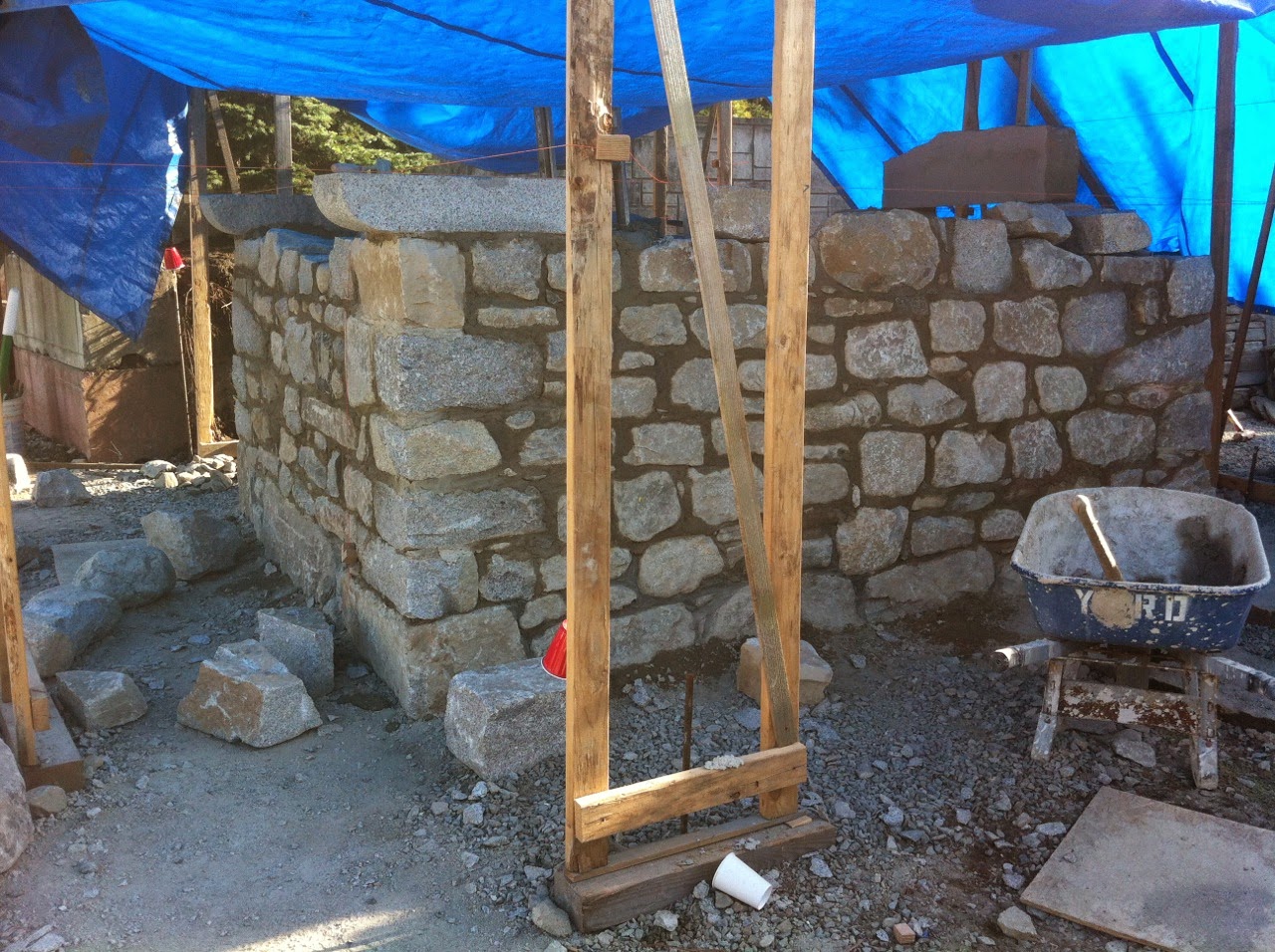 Once decided upon the clay-based lime mortar needs to not dry too fast or get rained on. 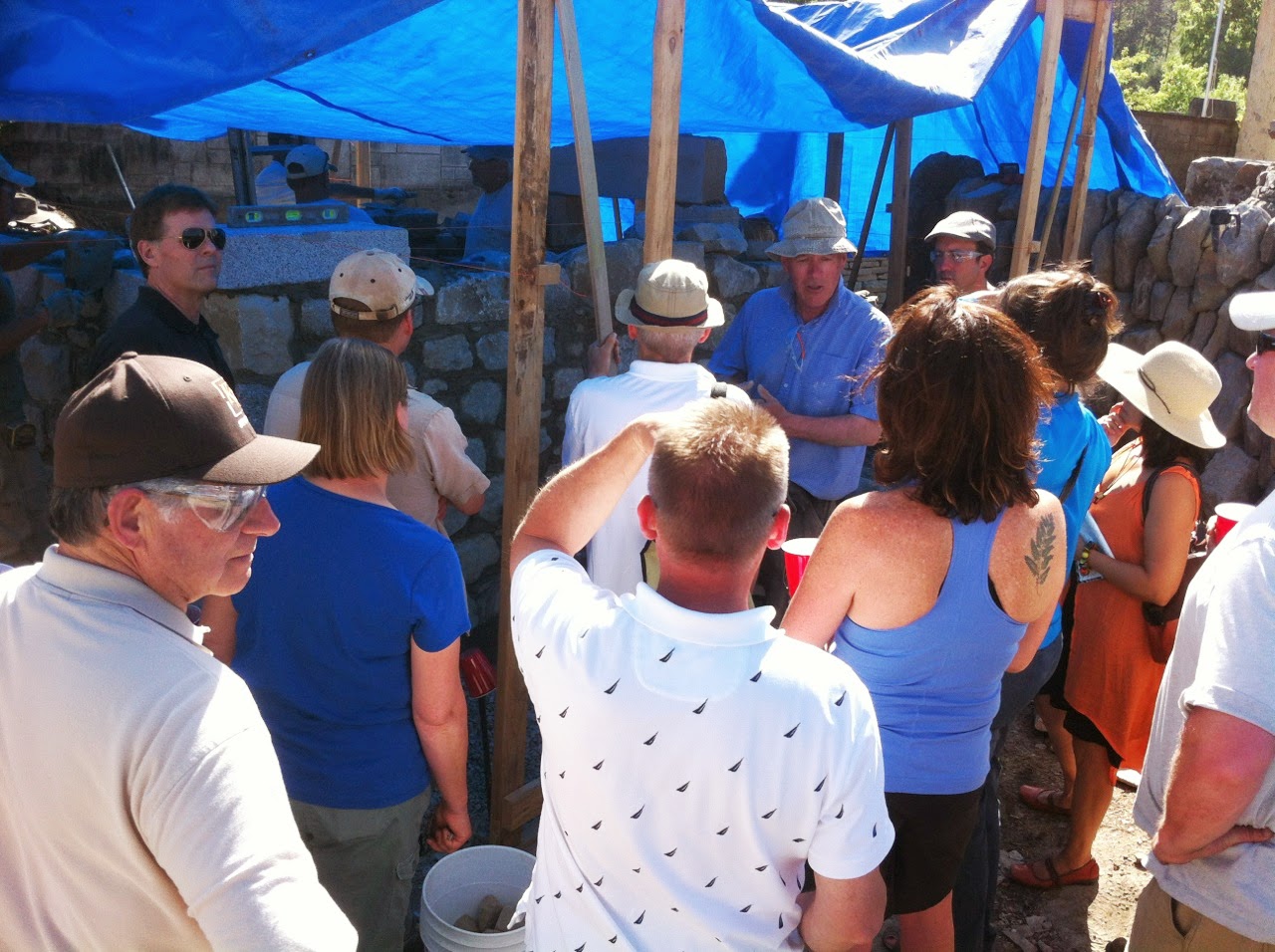 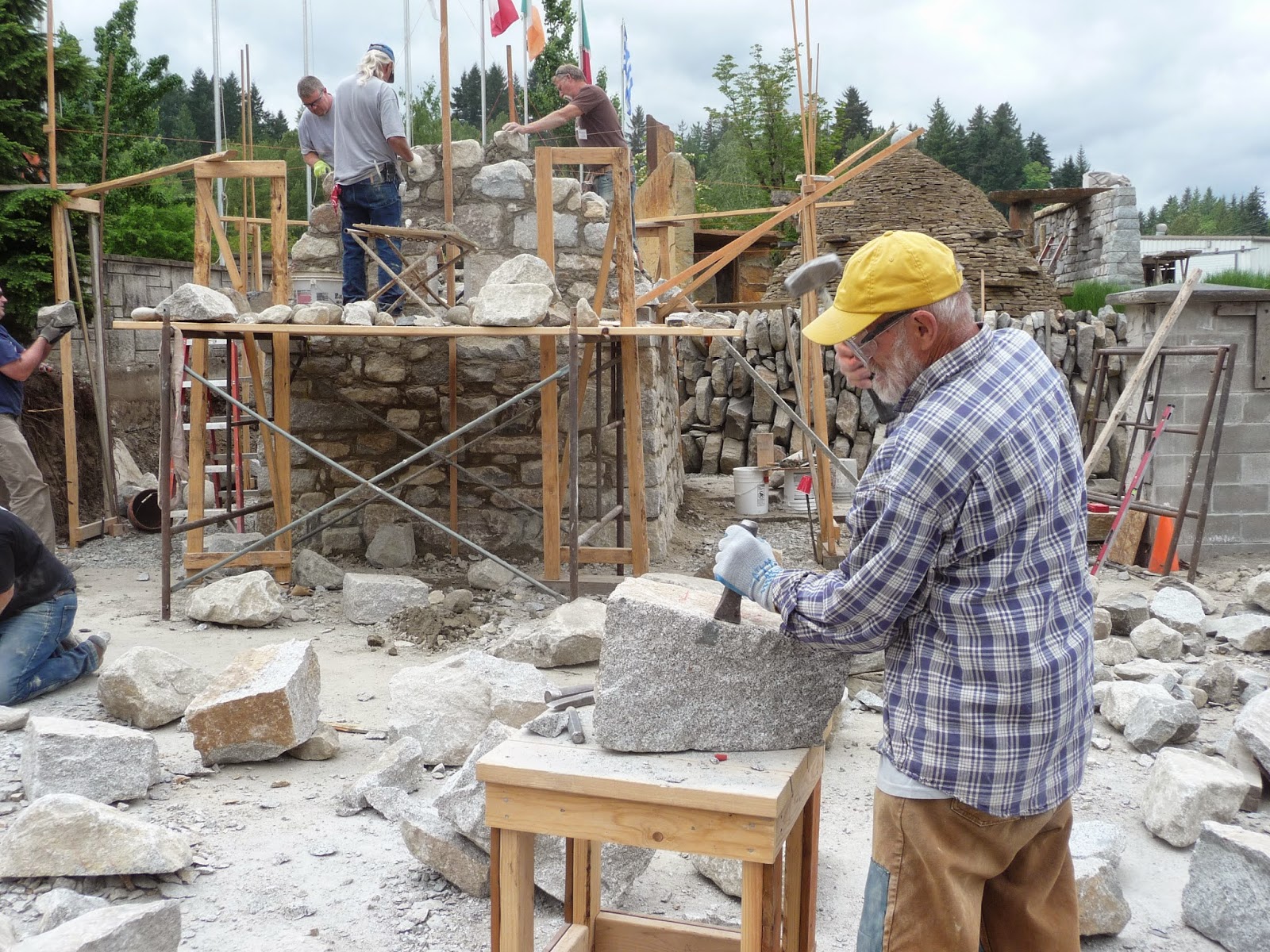 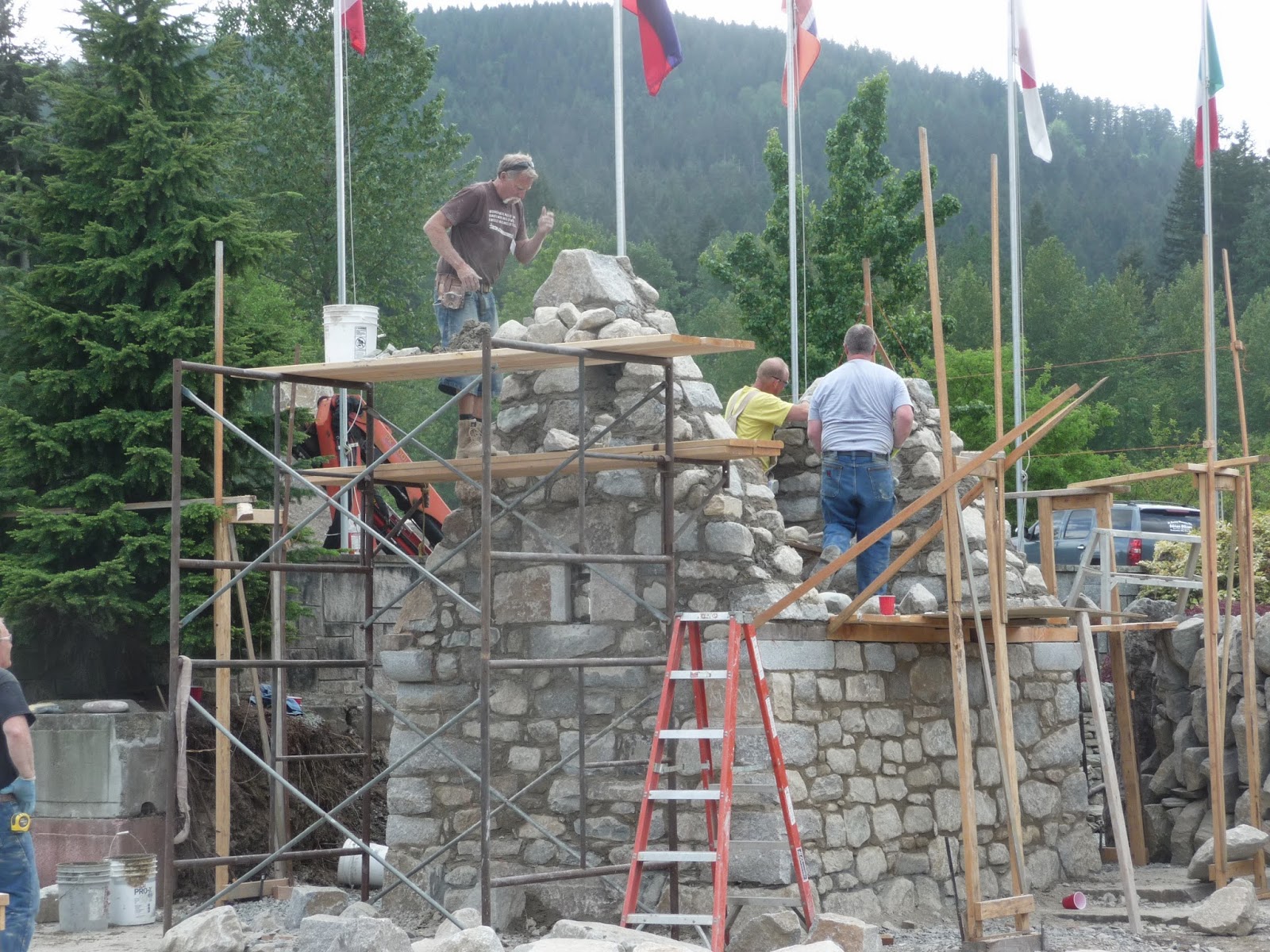 The work in progress 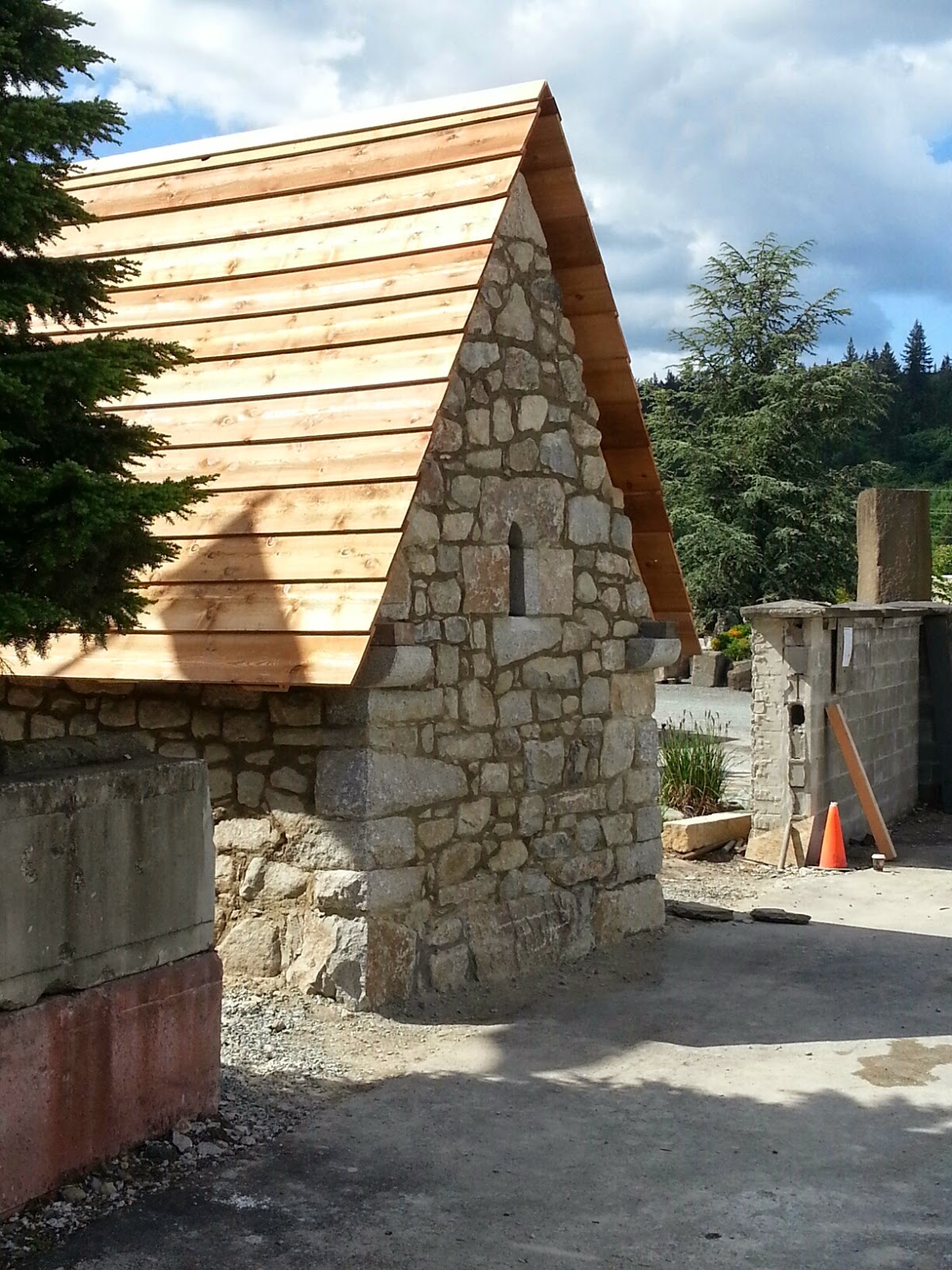 Temporary roof to allow mortars to harden properly.
Posted by John Shaw-Rimmington at 4:00 AM 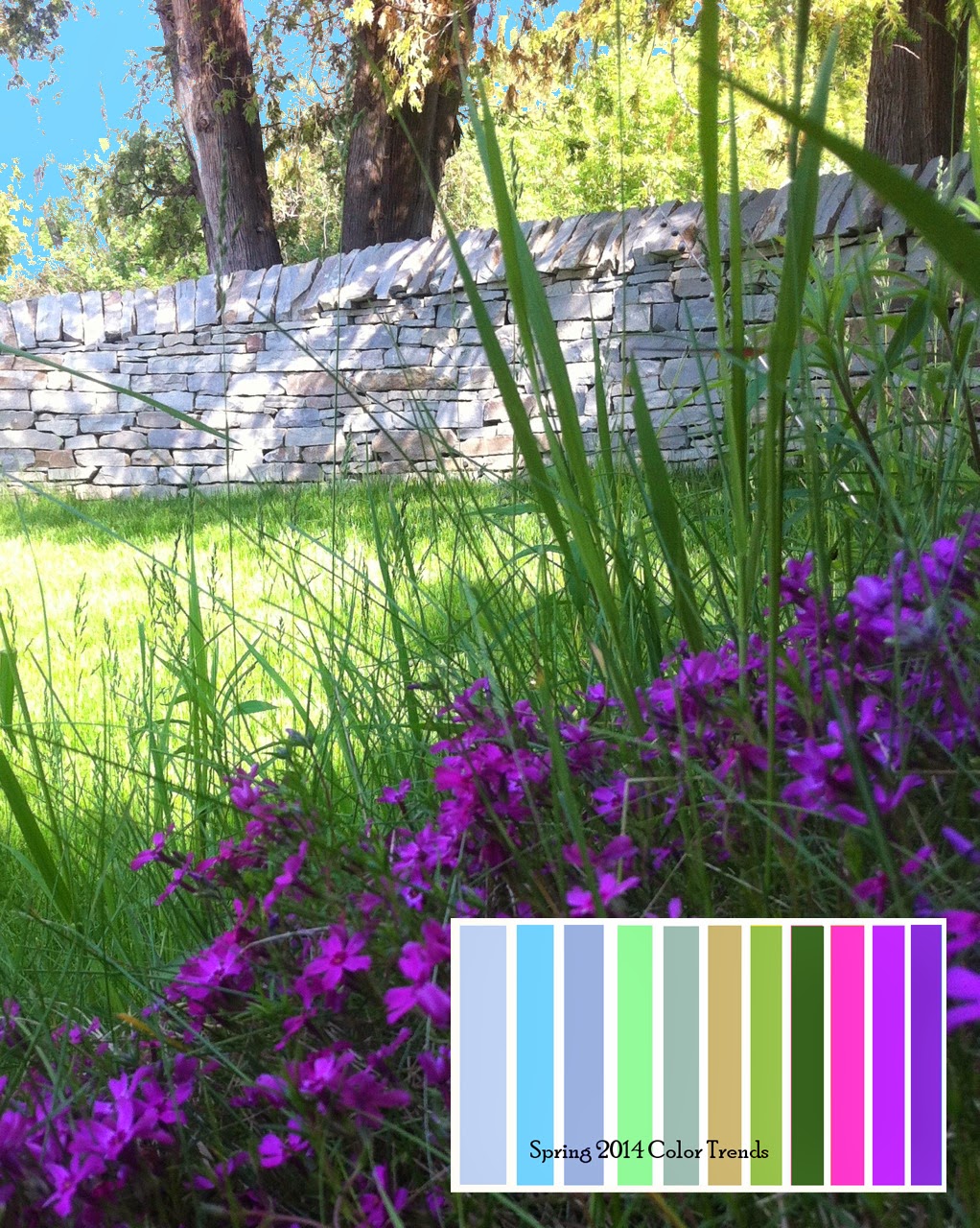 Then again - Spring is trendy! And so are Flowers! 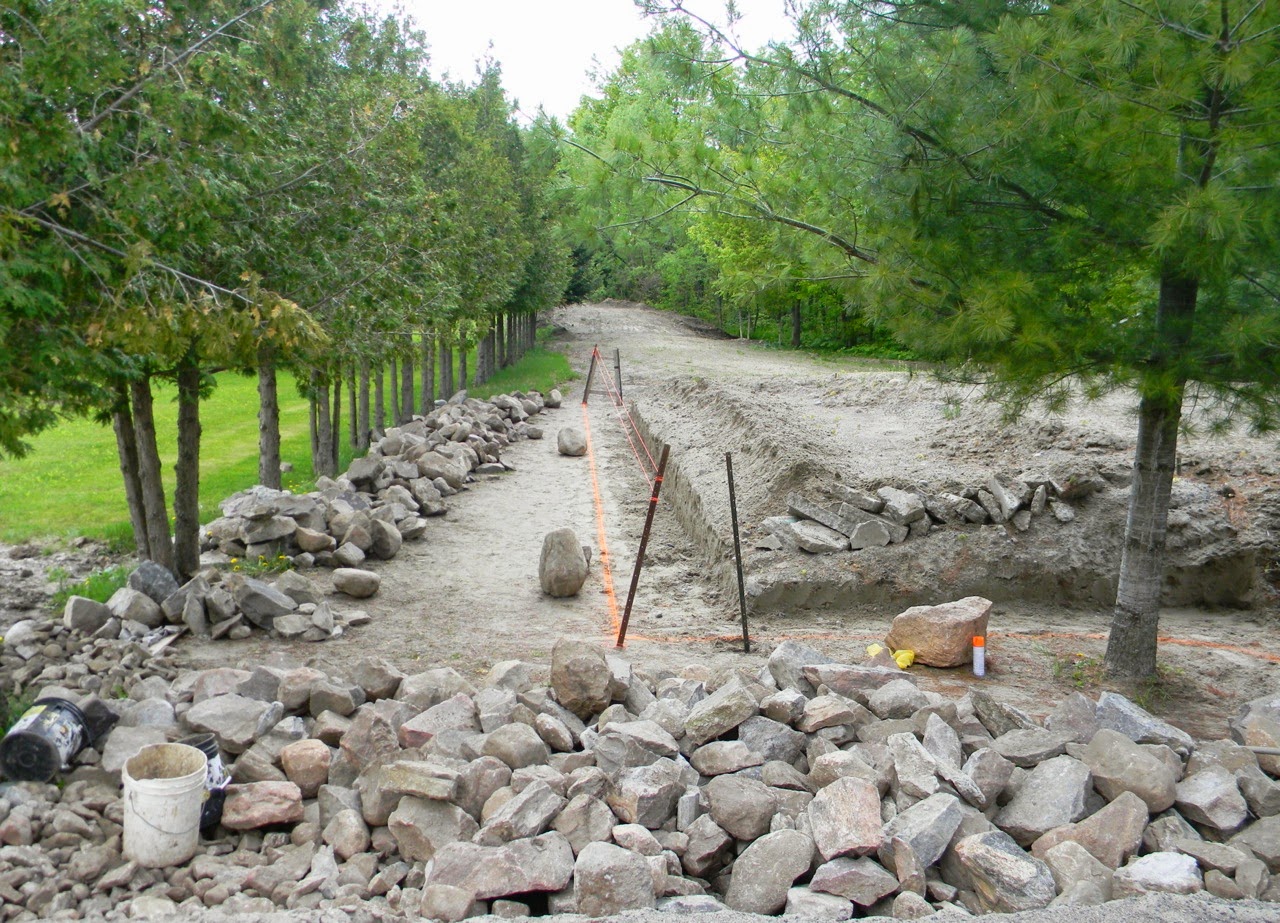 Two days before the terrace workshop all the stones had to be moved to the site in wheelbarrows from 70 yards away.
At the end of that day the two of us were very tired! 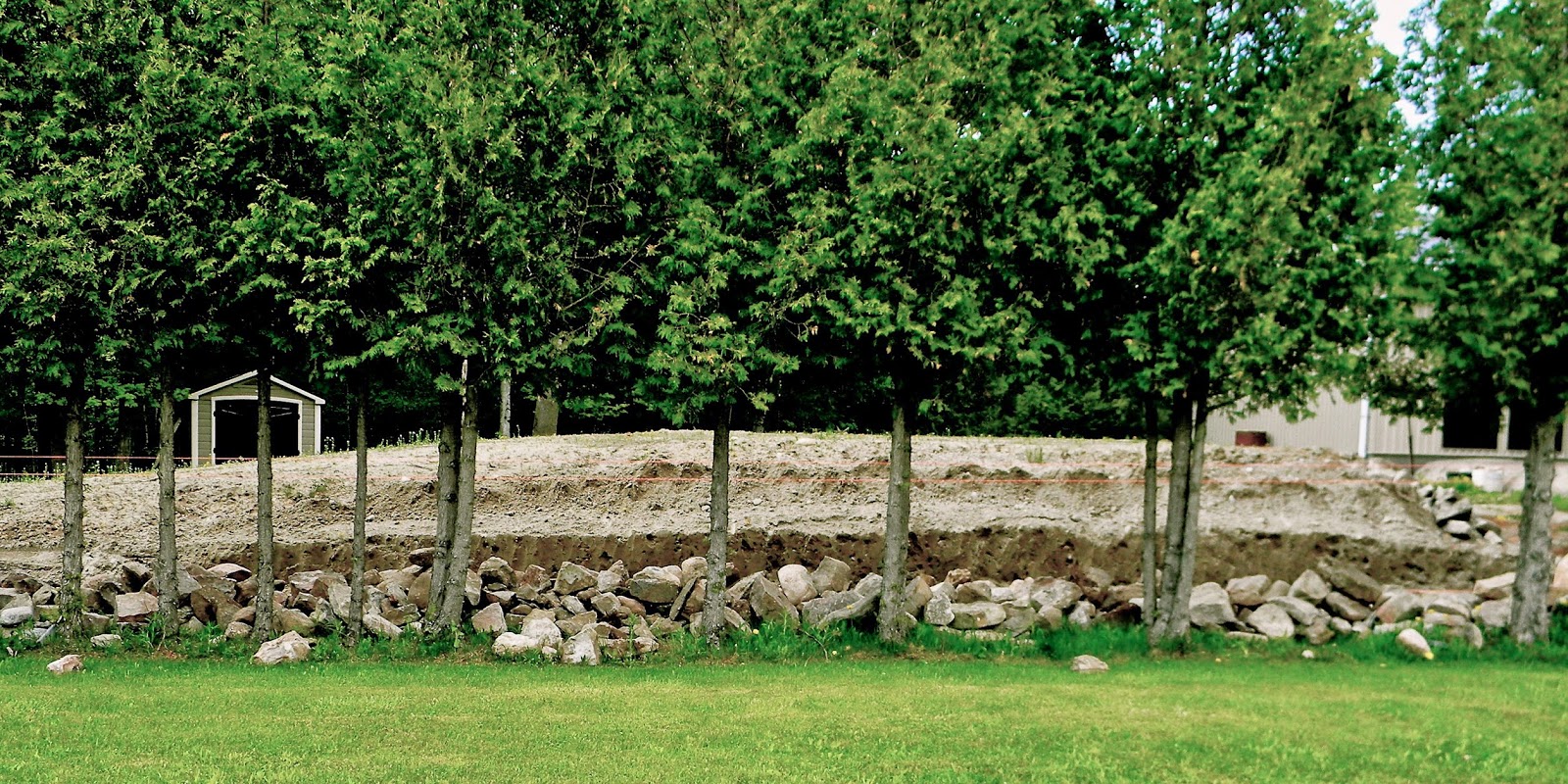 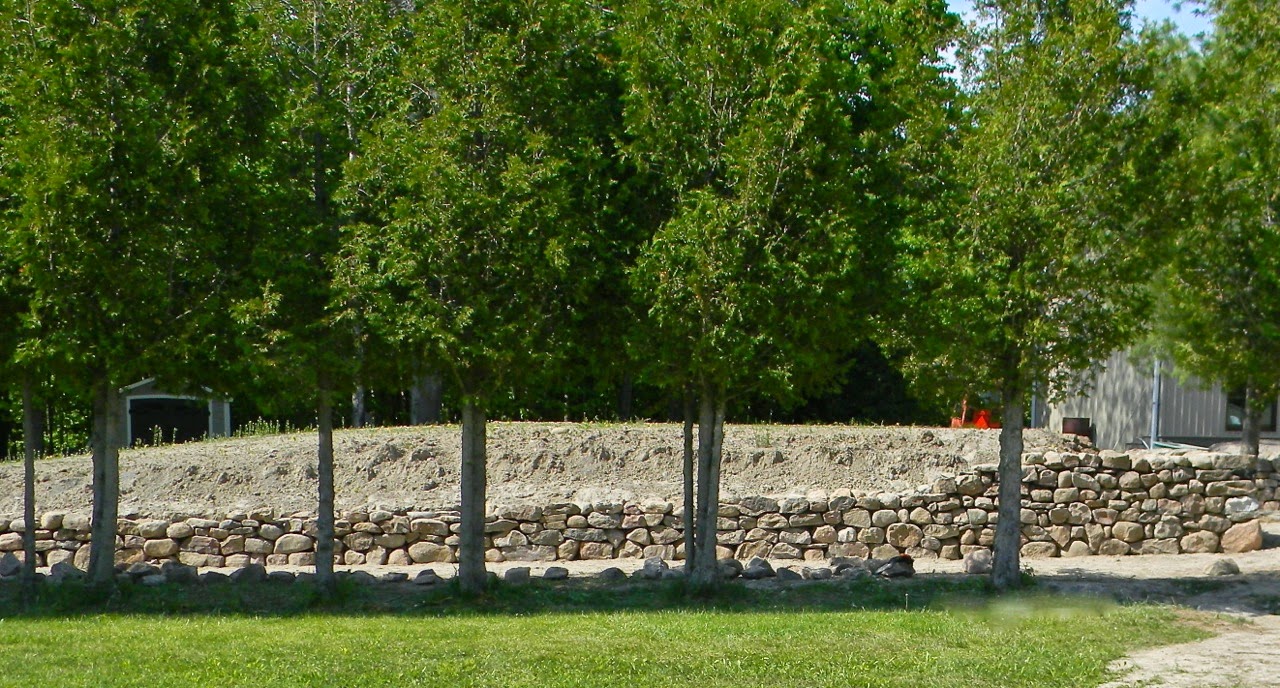 The students did a great job.
All the effort to get the stone there was worth it! 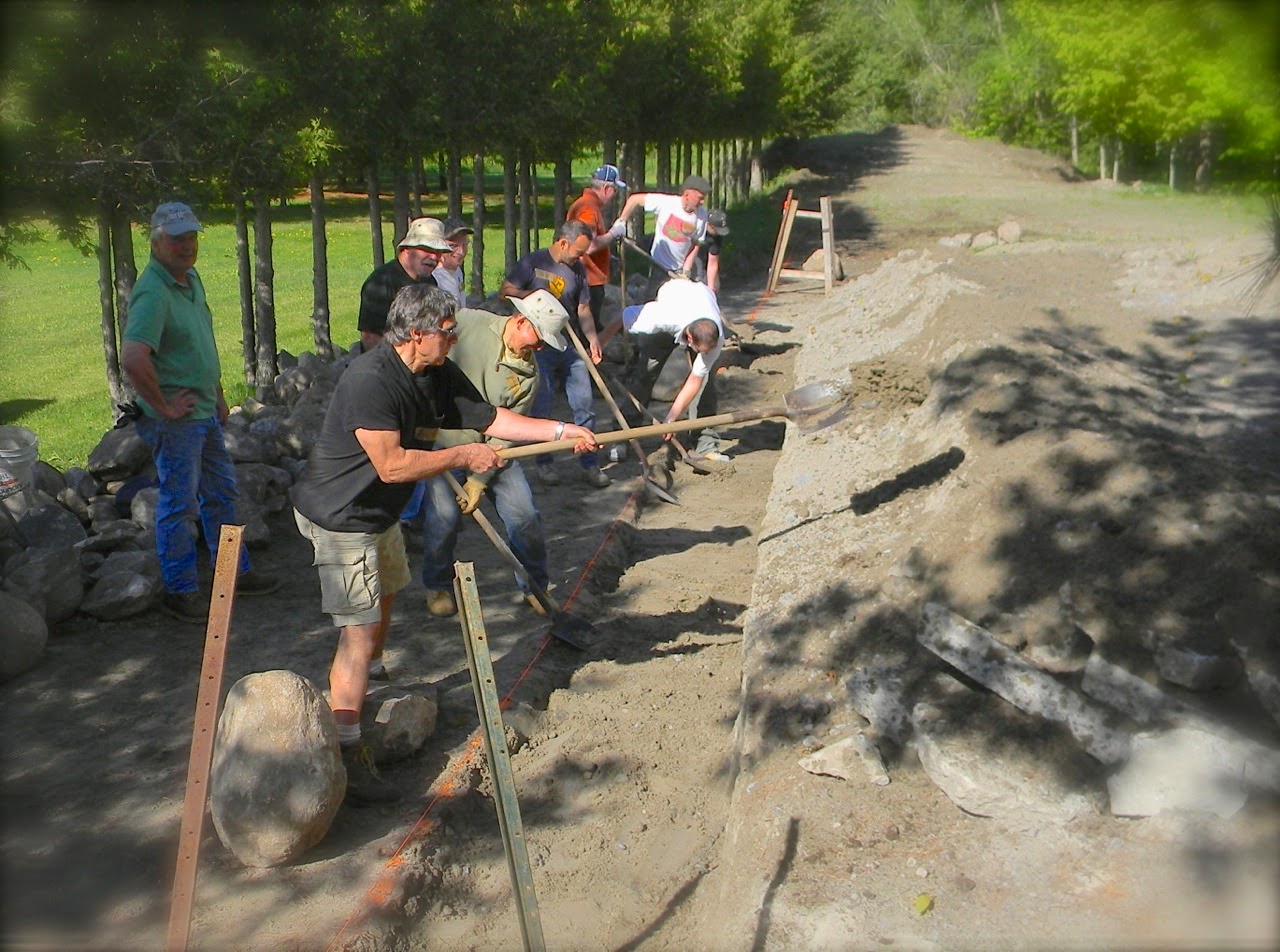 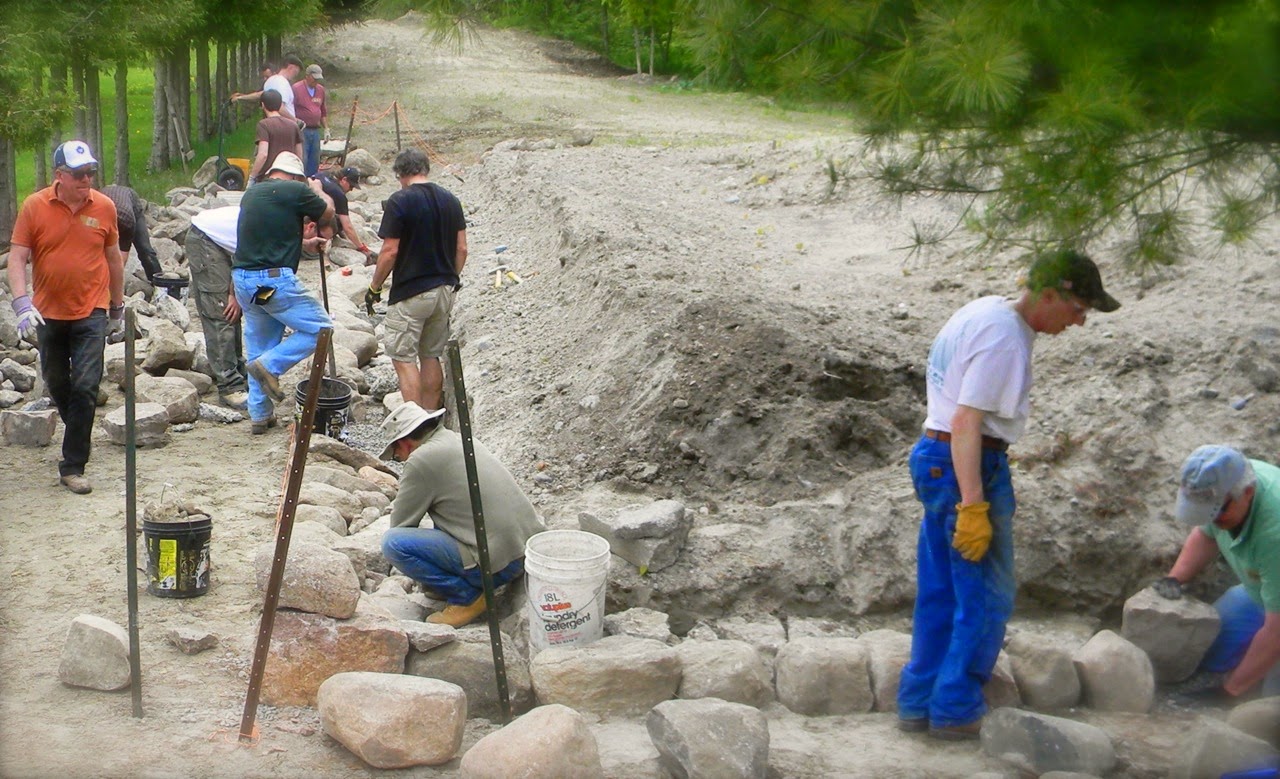 The terrace walling workshop I taught last weekend involved twelve enthusiastic guys who were eager to discover if a wall could be made using challengingly shaped stones from an old barn foundation.

While there were some nicely squared ones, the four dump loads of stone on the property contained mostly irregular rounded ones (some caked with mortar) and a lot of dirt.

Most of the dressed 'square face' stones had to be laid flat and into the wall (that is, not used upright as 'shiners') to be properly structural, since unlike the barn wall where they came from, there would be no mortar to hold stones together this time. 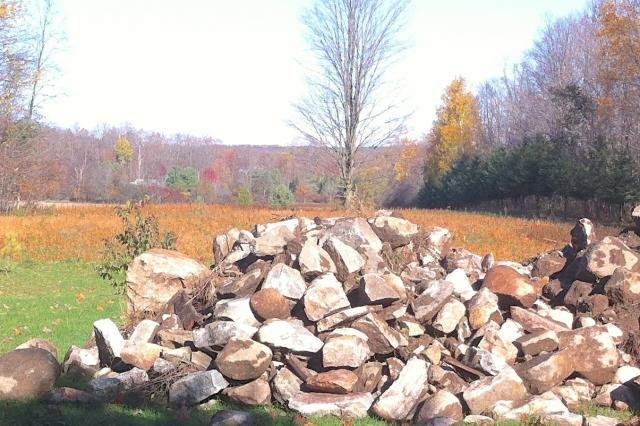 Posted by John Shaw-Rimmington at 3:33 AM

StoneFest 2014 - A Summary Of All That Happened

Sunny Wieler's comprehensive blog post about Stonefest 2014 which many of us attended in Seattle Washington two weeks ago, is reposted here in its entirety. Well done Sunny.


StoneFest 2014 and the Irish connection 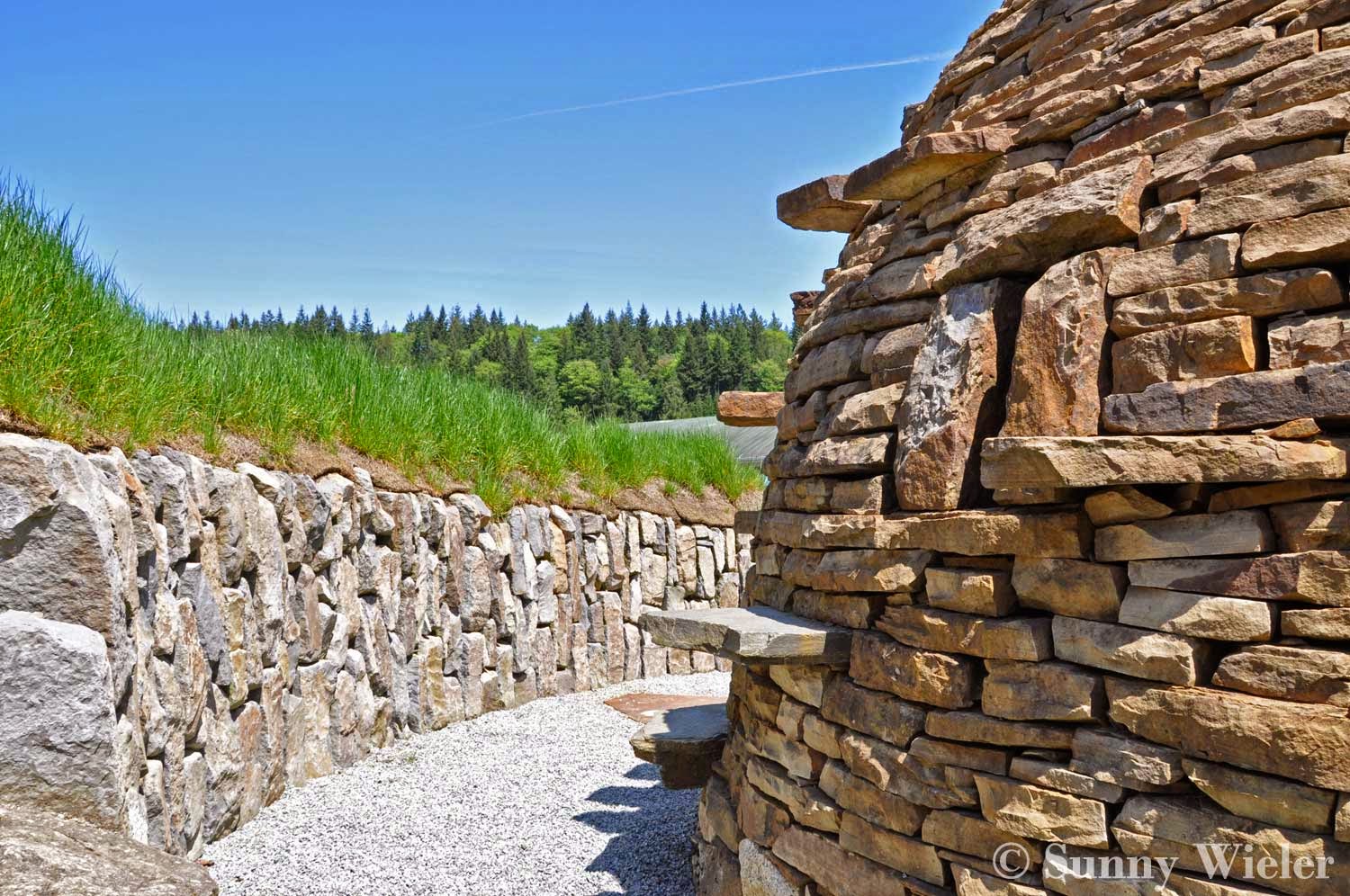 So after a number of years of procrastination and dreaming about going to StoneFest, this year I finally made it over to Seattle to attend the event. Procrastination was of course not the only factor in making the 14,623 km round trip to the event, finances and situation also played a big factor. If it were not for Alexandra and Scott of StoneFest and the work they are doing with the 'OnTrack' scholarship, dreams and procrastination would still be my only memories of StoneFest. 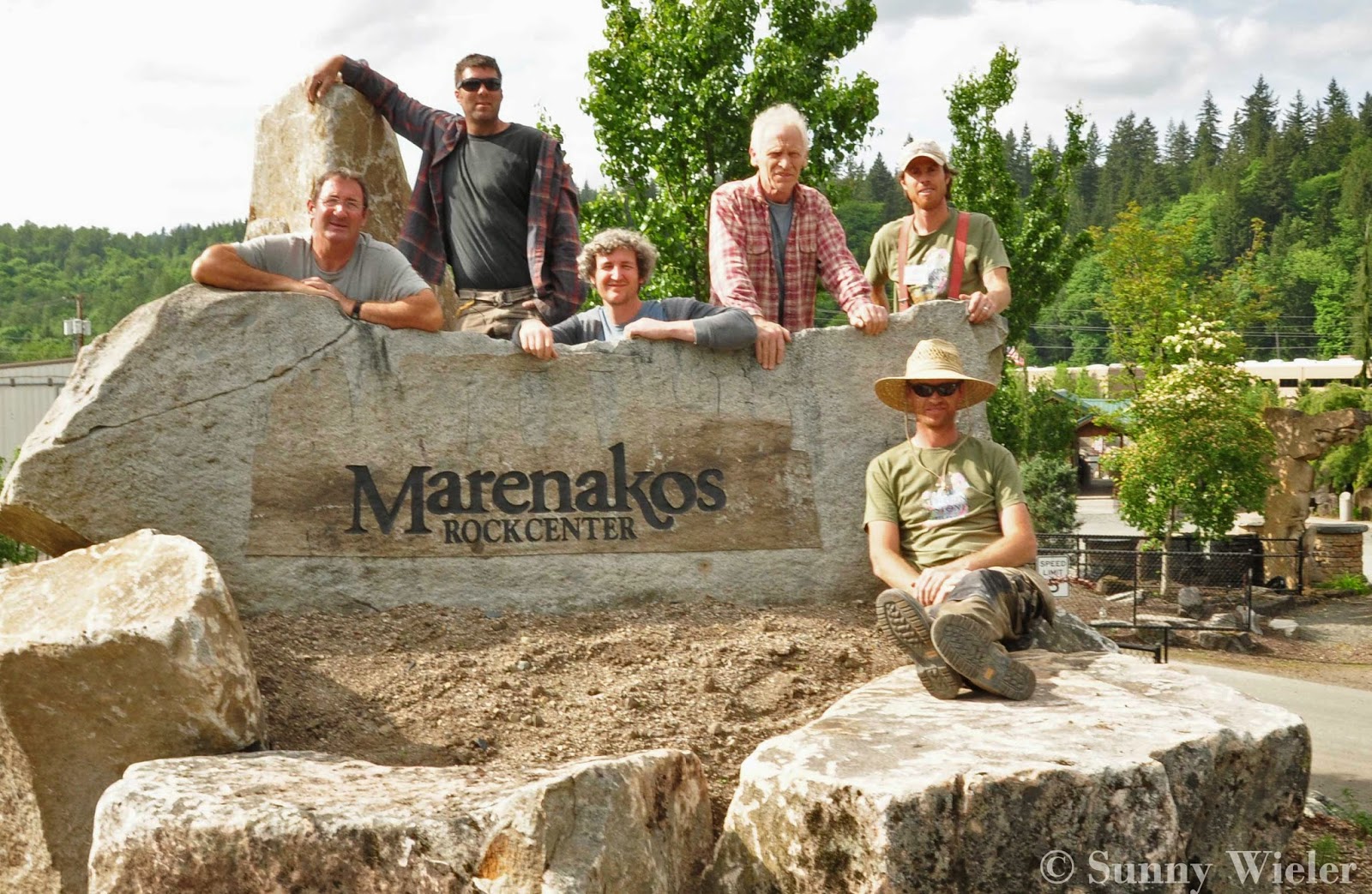 StoneFest came to be after Scott Hackney (partner of Marenakos Rock Center), Alexandra Morosco (sculptor, and Trow & Holden Field Representative at the time) and Randy Potter (Trow and Holden Tool Co.) had a short tool demo day at Marenakos. It was such a great experience they visualized, bringing together carvers and masons and working together for several days. As director, Morosco planned a four day event in 2004 through the Northwest Stone Sculptors Association which was a total success! Sculptors were exposed to the vibrant stone mason, Bobby Watt and learned about function, gravity and basic building principles. Masons got to blow off all their corners and make a square stone round or curvy. They had so much fun, It was clear this needed to happen again.

Marenakos Rock Center adopted the role of sponsoring this most extraordinary event in the Pacific Northwest and called it StoneFest. StoneFest is now the annual gathering for those who LOVE STONE. This educational event offers something that is a unique experience for the stonemason, the carver, architect, landscape designer, or simply those who want to further their connection with stone. 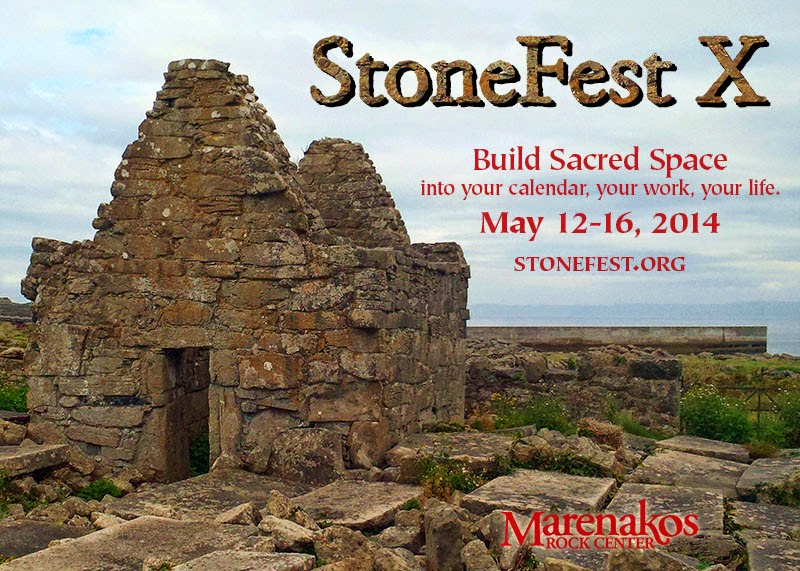 The story of this years StoneFest however, starts much closer to home at a stone festival far more familiar to me, Feile na gCloch on Inis Oirr. I have written about it many times, and it is a place special to many of us here in the stone world in Ireland. It has also become precious to Scott and Alexandra who have been coming to Inis Oirr for the past few years and will be back again this year.
Inspired by their recent experiences in Ireland as well as the large number of Irish and Scots attending, Scott and Alexandra went with a very strong Irish theme for StoneFest 2014. 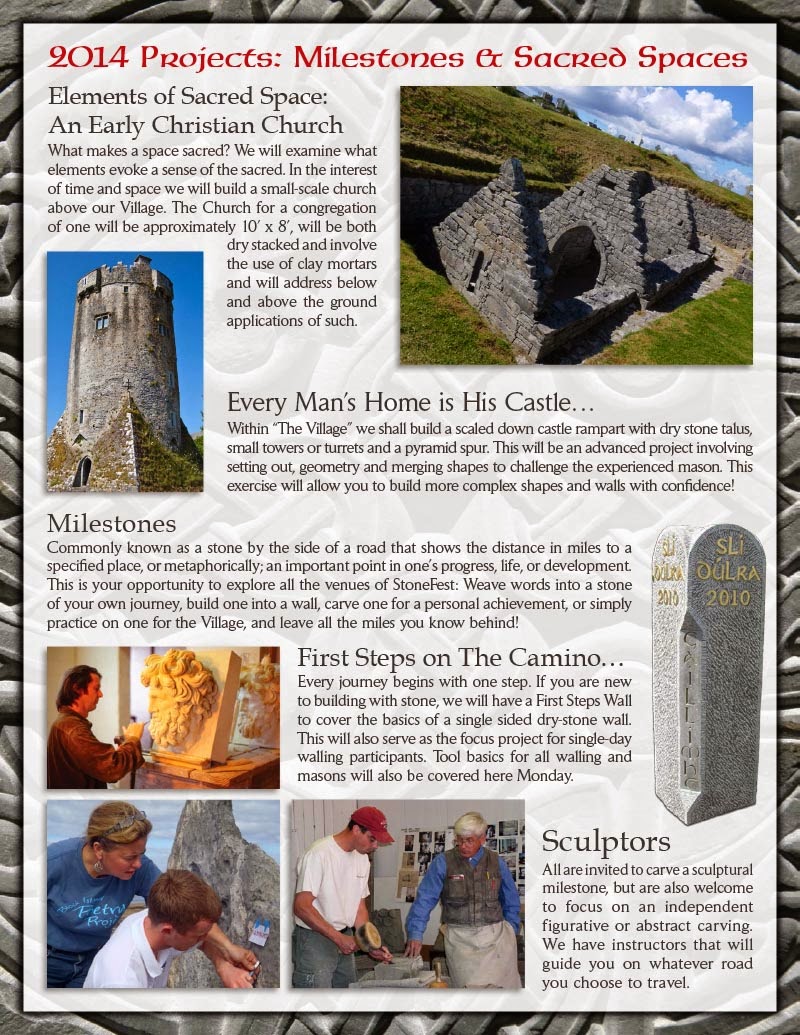 Renowned Irish stonemason / author Patrick McAfee is a regular instructor at StoneFest and has brought a regular Irish influence into the projects at StoneFest (note the Clochán in the photo at the top of this post that they built during the 2010 StoneFest)
For this years festival Patrick designed two very special Irish inspired structures.

This replica of an Early Irish Christian Church was built using local granite rubble and earth mortar and is only slightly smaller than the similar ones found in Ireland. 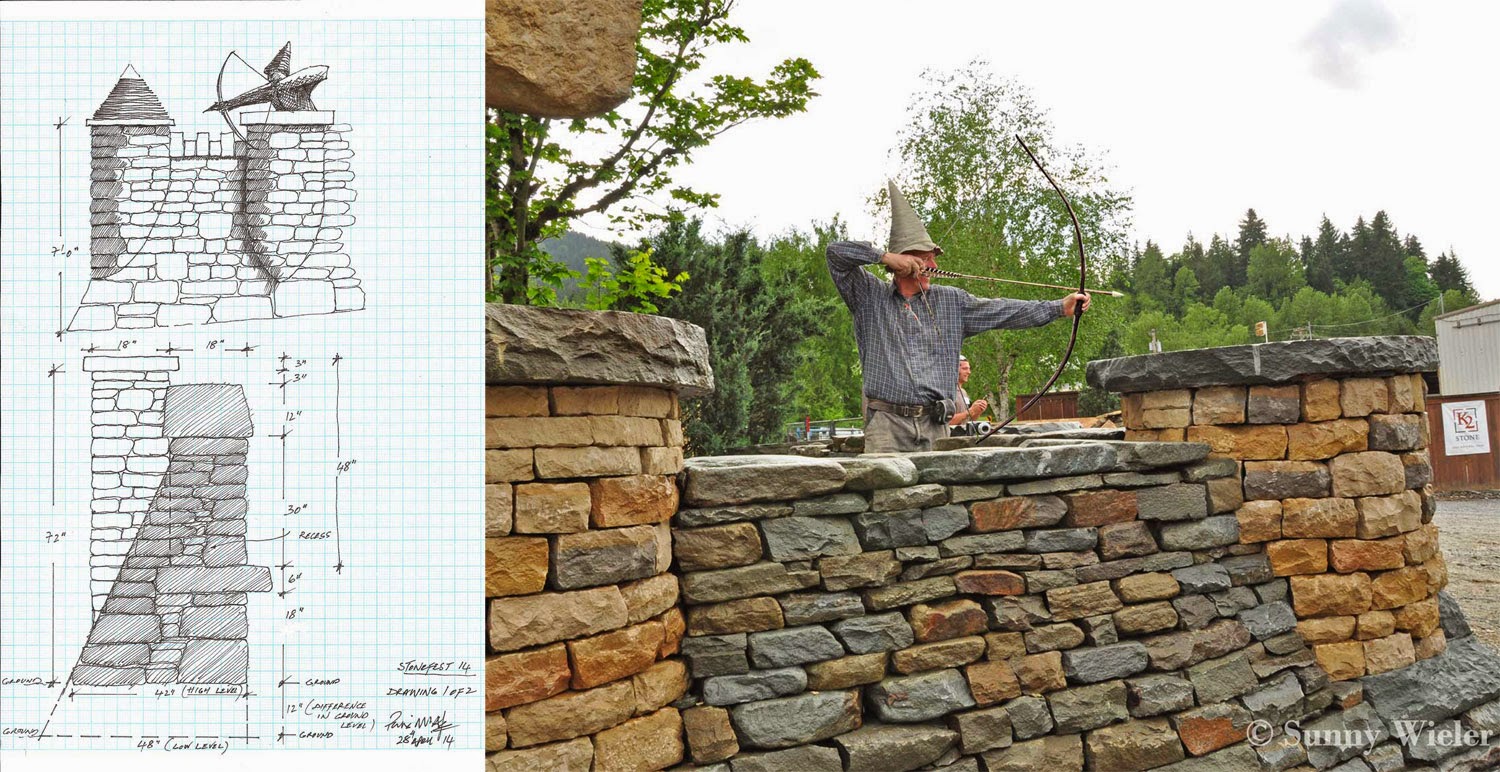 The dry stone project was inspired by the uniqueNewtown castle in Co. Clare (Unique because unlike most other tower houses in Ireland, Newtown Castle is round but rises from a square pyramidal base).
Inspired by this Pat designed a scaled down version of a 13th century defensive structure known as a 'Krak'.
This type of defensive structure has the same type of complex shapes as Newtown Castle, with round turrets emerging from the steep sloping defensive walls. The turrets were used to provide a projecting defensive position for archers, allowing covering fire to the adjacent wall. The steep slope (or batter) of the wall prevents attackers hiding at the base of the wall but also allowed people inside the fort to throw rocks and other projectiles down that would bounce off the sloping wall and into the faces of the attackers. (as demonstrated by Nick and myself below)
The Krak was built last week under the instruction of Nick Aitken, with the help of Ken Curran, Sunny Wieler, Eric Landman, Russ Beardsley, and Alan Ash to name but a few.
This scaled down Krak is a complex looking structure, but when broken down into individual elements it was essentially an L shaped wall (plum on one side, 1: 2 batter on the other) with round pillars on the corners.
The part that had everyone stumped for a while was the quoin stones, and how to get the cylindrical shape to emerge from the pyramidal shape wall. After much head scratching they managed to carve the cylindrical shape into the unforgiving Pennsylvania blue stone. This stone only wants to break perpendicular to the grain so trying to achieve  a 1:2 batter into a 6" bed took up a lot of time.
Fortunately the guys at Marenakos guillotined the limestone blocks into pie shapes for the turrets and so sped up the process and got everyone back on track.

The builders had hoped to go higher with the towers but the lack of time and stone gave everyone an excuse to come back. All said and done, it did make for an attractive structure. It was also great for wallers from Ireland, America, Canada and Scotland to come together to play with stones. 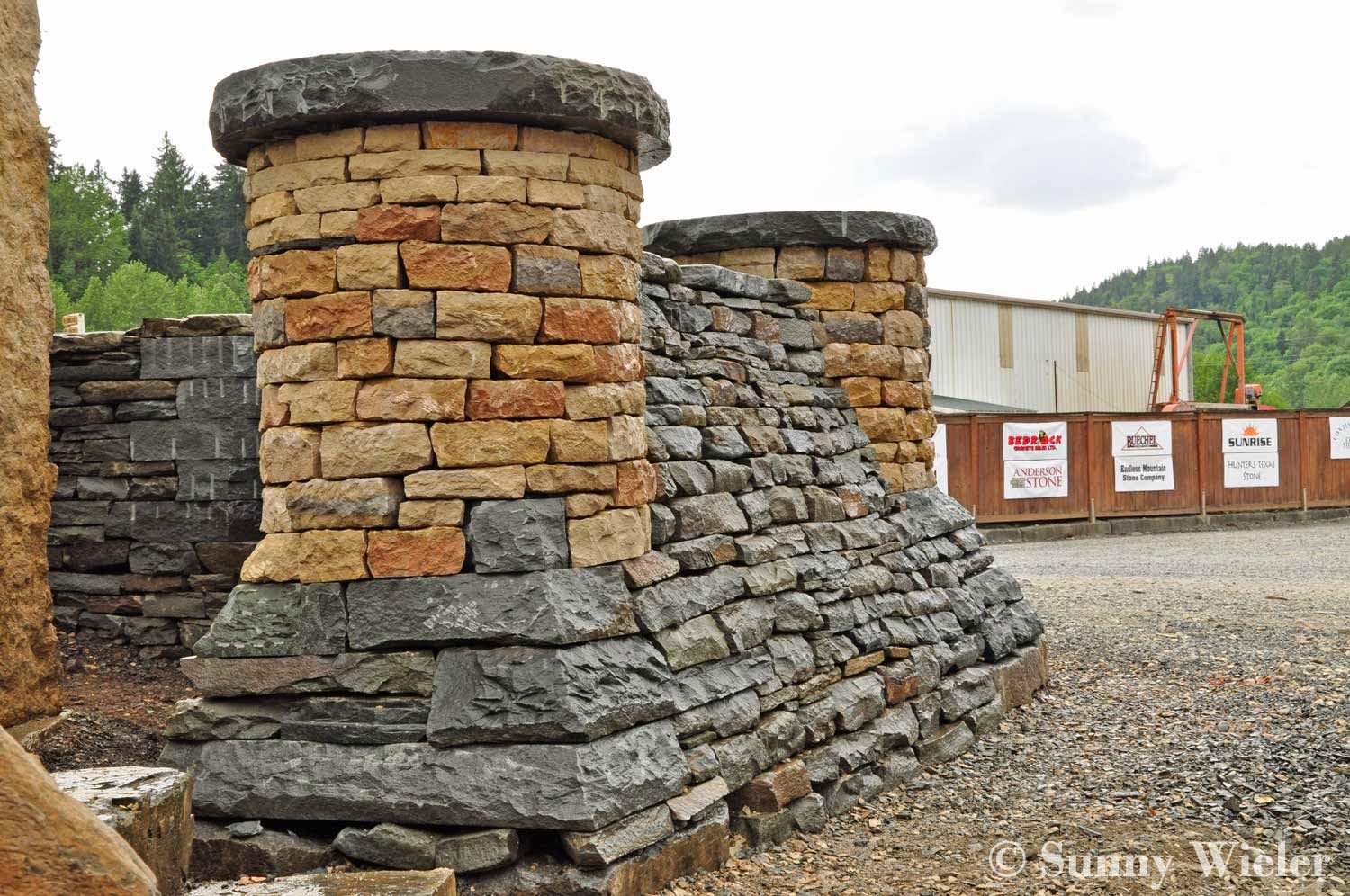 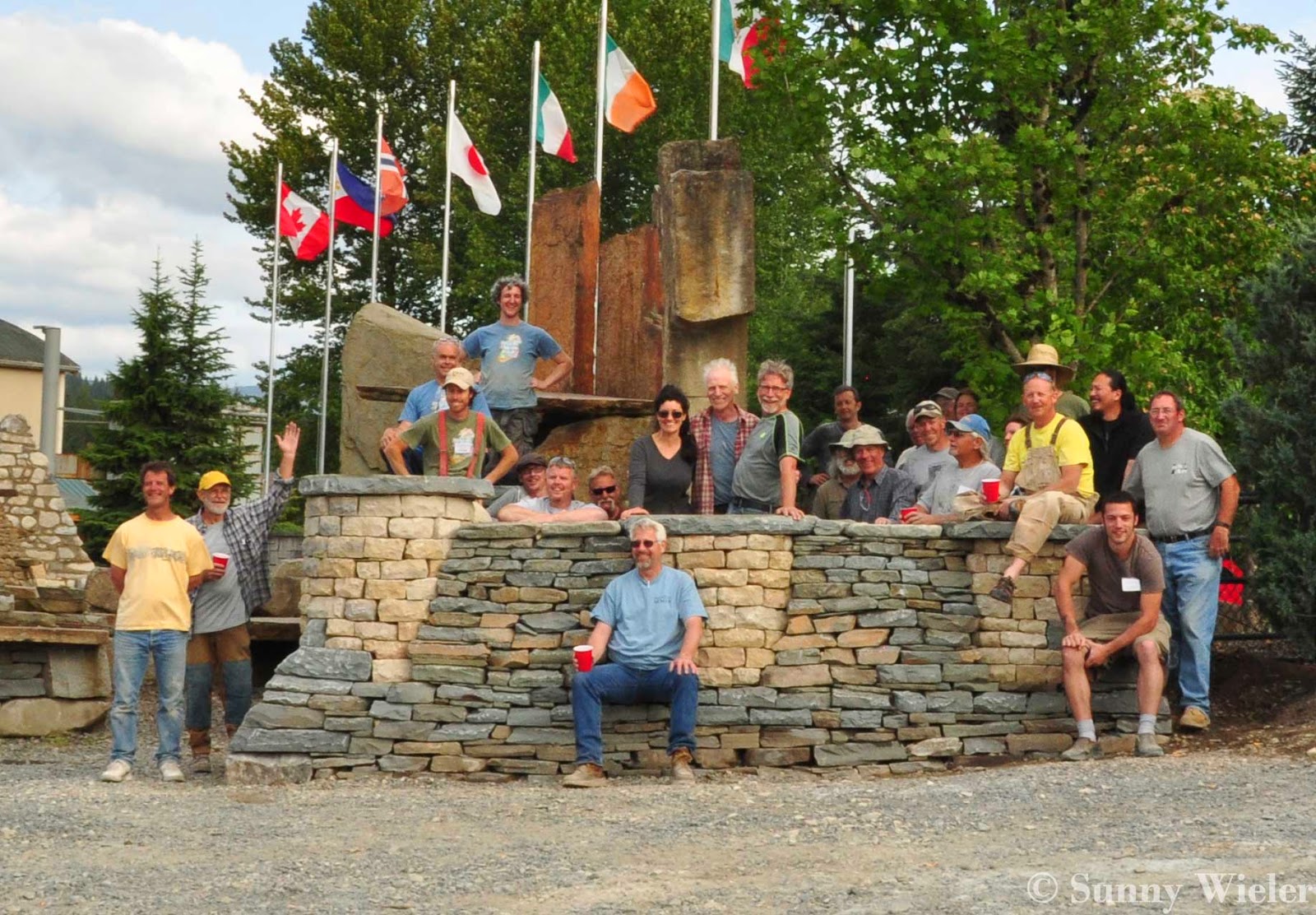 Milestones
Under the instruction of some of the finest stone carvers and letter cutters around (including Nicholas Fairplay, Keith Phillips, Karin Sprague, Tracy Mahaffey and Richard Rhodes)
The theme for this years workshops was Milestones. 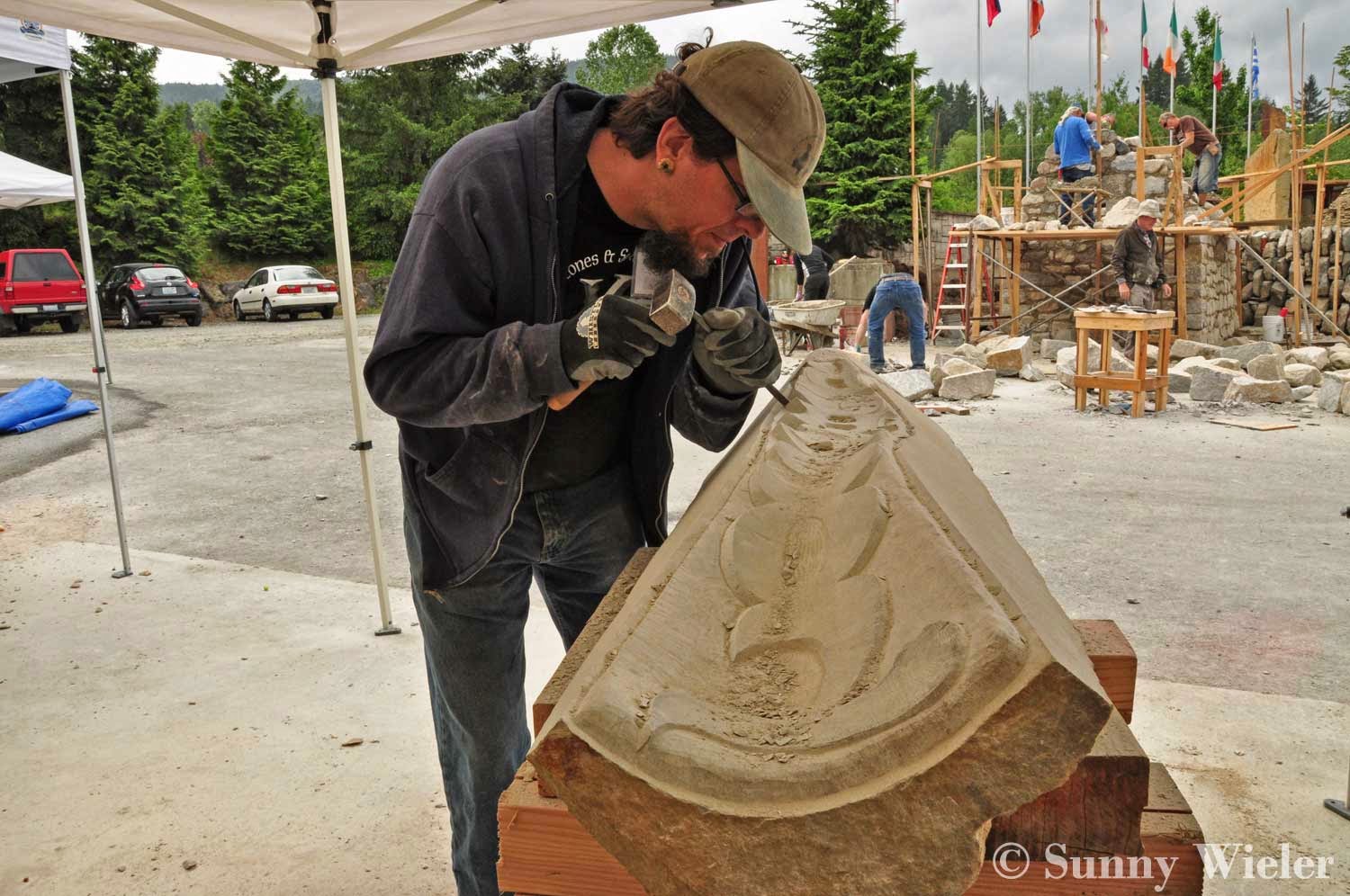 Most commonly, Milestones are known as a stone by the side of a road that shows the distance in miles to a specified place. Metaphorically, they have also become known as an important point in the progress or development of something, a very important event or advance. Students were given the opportunity to explore all the venues of StoneFest: Build a milestone into a wall, carve one for a personal achievement or celebration in ones life and bring it home.
One of the things I love about events like this is seeing people getting their first taste of stone and instantly becoming hooked. Whether its someone like Neil above who has decades of experience working with dry stone, who has only now discovered his passion and talent for letter carving, or someone like Daniel Poisson (below) who before StoneFest had never touched chisel and stone before.
Daniel Poisson is a graphic artist but this was his first ever carving. I am also delighted to hear that not only has he sold his first stone sculpture, he has already begun work on his first commissioned piece. You can read about Daniel's experience at StoneFest on his blog here.
It is a wonderful feeling making that first connection with stone and thinking 'HELL YAAA' and being hooked evermore.

This is one of the things I love about StoneFest, it is a convergence of all the disciplines of stone. There is no cliquey groups here, no hierarchy or prejudice, just people brought together in a collective celebration of all things STONE. 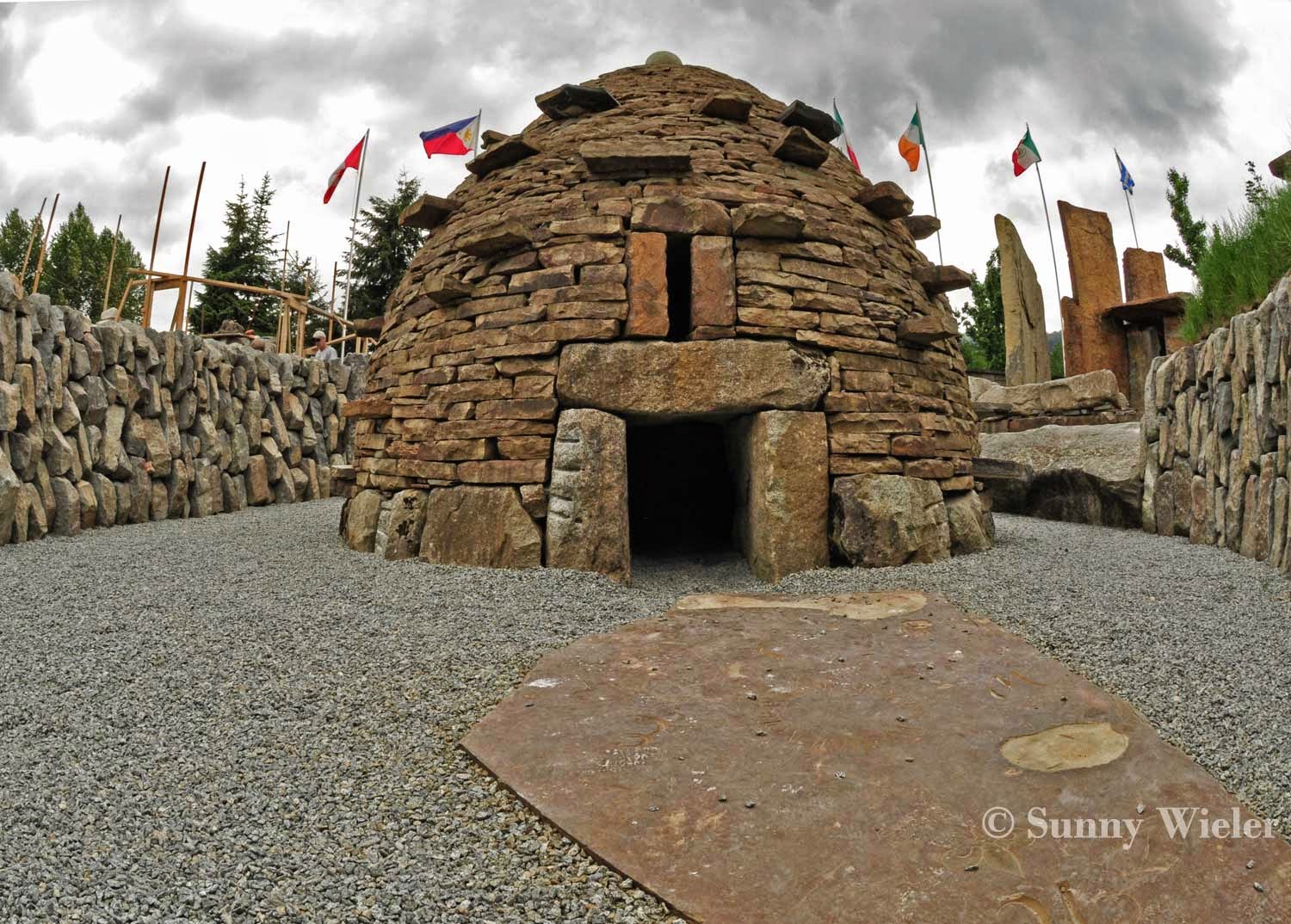 Another highlight of the week was the big StoneFest Feast on the Thursday. The spectacle put on by the hosts in honour of the Celtic themed festival was nothing short of jaw dropping, with a night filled with festivity, music, food and a few pints!
It is important to note that the StoneFest Feast was also a fundraiser for the wonderful 'OnTrack' Scholarship which made it possible for people like myself, Ken Curran and Rory Noone to attend. You can read more about this Scholarship program here as well as information about becoming a sponsor of this wonderful program.
And so ended StoneFest 2014. With a heavy heart I packed my bags and started the long trek back home. Arriving back home in Ireland I felt jet-lagged but yet strangely invigorated at the same time. Convergences like this are important, I feel, the energy and enthusiasm here is infectious. Just as important is the exchange of stories, knowledge, and the lessons learned with people in the same industry, which is hugely beneficial.
I cannot thank Alexandra and Scott enough for what they are doing on both a personal and professional level. It was so wonderful to see people connect with stone and indeed explore stone in new ways.
To my knowledge there is nothing else like Stonefest that brings together all the disciplines of stone and celebrates them equally together. There is a great scene of passion and inclusiveness here that was evident in all the smiling faces I saw there all week.
I must admit that the past few months leading up to Stonefest I had been doubting my future with stone due to the sheer lack of opportunities here in Ireland. But as I had hoped it would, spending some time with like- minded people during and around StoneFest has given me the inspiration and focus to carry on. 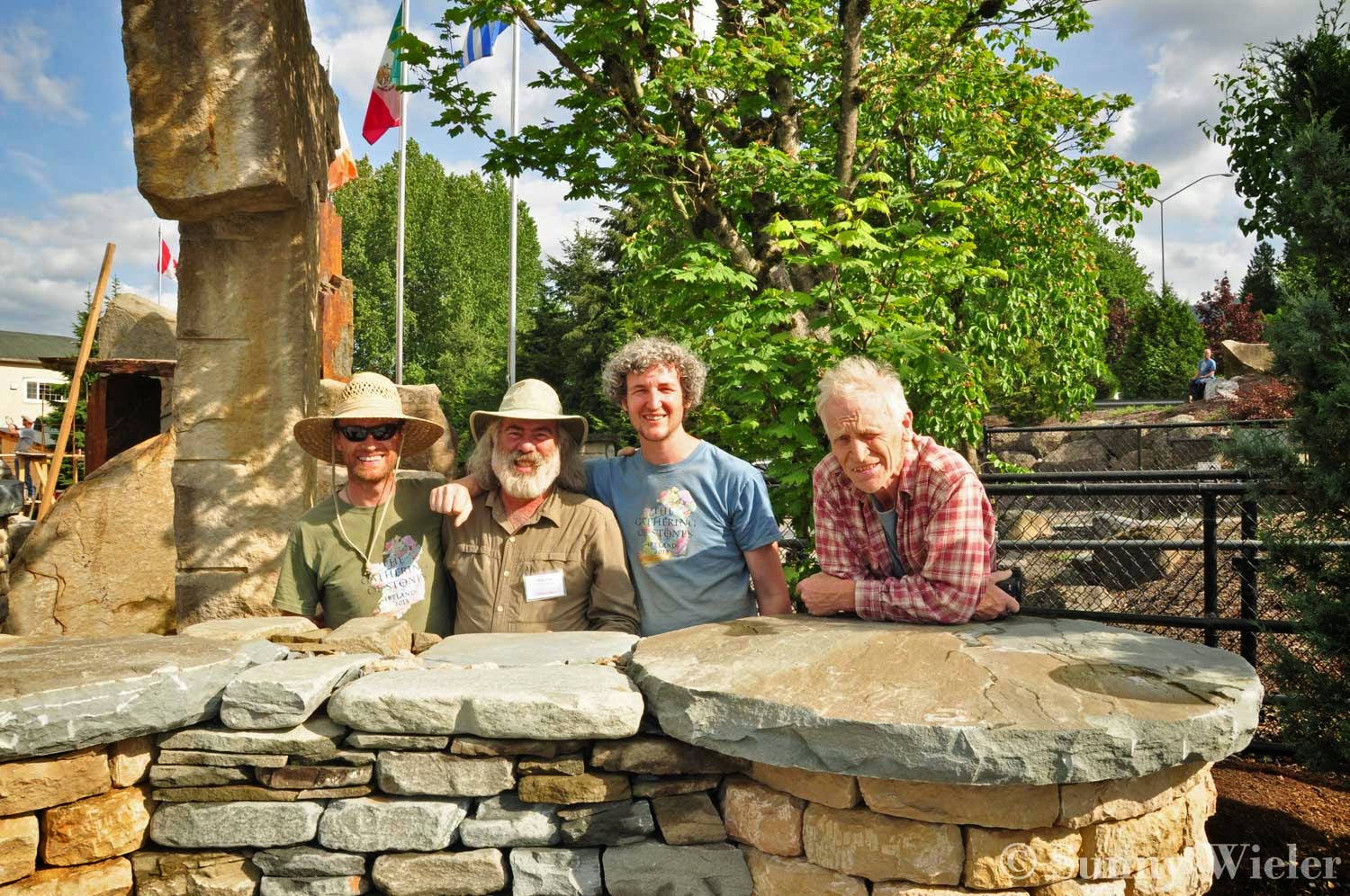