Andrew Geekie took a DSWAC course I taught back in 2005 in Port Hope, Ontario and from that start went on to build a lovely garden wall on his own country property. He and his wife moved into town a few years later, had a house built and began constructing another beautiful wall along the north side his front yard. Last year he emailed me to say he was off to England because he was enjoying it so much and wanted learn more. Here is a report he sent me this week about that trip. 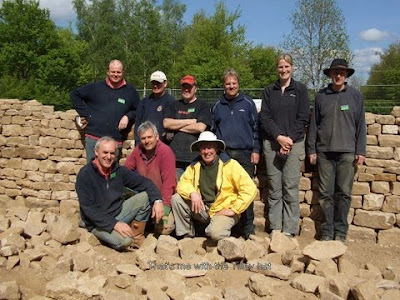 A WEEKEND WITH THE YORKSHIRE DRY STONE WALLING GUILD

Well with a beginners course under my belt and a couple of walls to my credit I was really enjoying my new hobby. I had read a great deal on the subject of walling, but was still not entirely confident that my technique was acceptable, or on a par with the standards of the local walling fraternity here in Port Hope. I was also aware that my construction times were way to slow to contemplate being tested on my proficiency. So where do I go to obtain that confidence I need for a better sense of satisfaction on completion of my next project? Home of course!

Well, strictly speaking, two and a half hours drive north of where I grew up but North Yorkshire is certainly home to miles of dry stone walls.

I discovered via the internet that the Yorkshire Dry Stone Walling Guild held weekly courses for beginners over the spring and summer months and as a trip to England was in the planning stages, I decided to enroll in a course. Luckily, the course turned out not to be a typical wall repair in the middle of nowhere but a permanent build within the confines of ‘ Fountains Abbey ‘ in Ripon, North Yorkshire. The wall was to be built utilizing students, over four courses during May and June. The finished wall was six foot tall and enclosed an area of six hundred square feet with a turnstile incorporated into its construction.

Apparently, the Abbey gift shop had the need for an outdoor facility to sell herbs and potted plants. The current practice was to have them on display at the gift shop exit where naturally the general public considered anything on the tables as ‘ going away gifts.’ The turnstile and walled enclosure would now shepherd the visitors past the gift shop cash registers with their plants in hand.

All settled into my bed and breakfast and with a good night’s sleep behind me I headed off to Fountains Abbey to begin the first day of the course. On arrival, I was immediately introduced to the two instructors Cliff Bailey and Steve Gray along with eight other students. After a brief orientation we went straight to work with the students being evenly split on both sides of the wall. Hands-on is a great way to learn and although the majority of us were new to walling it wasn’t too long before we were using the local terminology and watching a wall grow “ right before our very eyes “ as Arthur Askey used to say.

Small holdings, hobby farms or even country houses with acreage are becoming increasingly popular in the British Isles as the people head for the country and away from city living. However, many of these properties have dry stone walls in various states of disrepair and the desire to return them to their original splendor has sparked an interest in walling.

Consequently, we were taught how to strip out a damaged wall, identifying the various stones - cope, cover, through and building stones – along with foundation preparation. There seems to be no need to excavate any further, other than removing the turf layer in North Yorkshire. This may be different in other areas of the UK but I gotthe impression that creating a drainage ditch as we do in Canada is not necessary.

If I were to criticize the course format in any way, I would be hesitant to fault either of the instructors, for to my mind, the project itself made it difficult for eight or so students to all contribute at the same time. Choosing the best stone for the correct fit, is time consuming, and upon finding that stone and returning to the work area, only to find another student has already supplied a stone for that very same spot in the wall, made for a frustrating few moments. However, they were far and few between and a small inconvenience for the privilege of taking part in the construction of a wall which will still be standing long after I’m gone.

The overall experience made for a very gratifying weekend which I would certainly recommend to anyone interested in learning more about the art of dry stone walling …..

A THERAPY SECOND TO NONE!

Posted by John Shaw-Rimmington at 1:13 AM