The light hand of the plowman and the waller 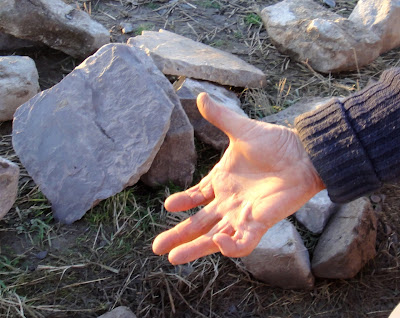 Welcome to 'Thinking With My Hands' -Where fingers can sometimes convey more than words.

Norman Haddow and I drove by a plowing match near Perth last Sunday. We stopped and watched for a while and I took several photos of a pair of horses pulling a plow. I marveled at the team in this video responded to the subtle messages sent through the reins from the man walking behind the plow. He held the leather lines in the baby fingers of each hand. 'Plowman's Pinky' is an expression used to describe the finger control used to guide the horses along the furrow in this traditional type of plowing. It is interesting to watch and to imagine how quiet and satisfying it must be to control large animals like these with such a subtle means of communication. It's also quite a contrast to hear all the tractors at the plowing match in the background buzzing like a bunch of wasps.

Above is a photo of Norman Haddow's hand. It is the hand of a full time dyker. Norman tells me the permanent curl in the baby finger is from holding the walling hammer too tightly over many years of shaping stones and breaking up hearting. Is this perhaps a wallers pinky? Norman told me it has been caused by 'trauma to the tendons'. He says he maybe learned a little too late in his career how important it is to 'Let the hammer do the work' .

His son Duncan once asked him what colour he thinks of when he's breaking stones.

The plowman and the waller work the field. They leave earth and stones in rows upon the land. Their hands take the material of the past and shape the future. In both strength and gentleness the horse and hammer learn their work. Their knowledge is received through hands which lightly hold them all day long.

Posted by John Shaw-Rimmington at 1:40 AM