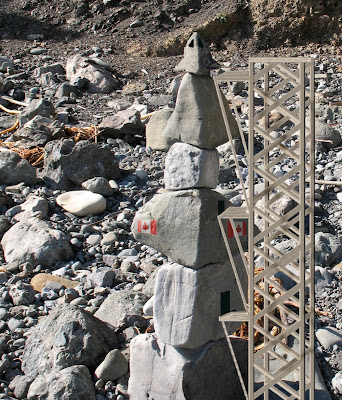 Dry stone walling is not rocket science. It is a science however and it does involve rocks. In fact it is probably the most basic of sciences. It breaks down the concept of structure into the simplest elements the way the science of logic examines the process of reasoning. By analyzing how logic works and breaking it down so as to only allow well-defined statements, using inductive and deductive arguments, a basis is established for understanding the nature and structure of formal and symbolic logic.
By experimenting with heavy random-shaped three-dimensional objects and analyzing how they can be stacked and fit together best so as to make a durable, reasonably permanent structure, and then applying that knowledge, by building free-standing walls of stone, we are doing the same thing. (without using any mortar of course) We are understanding informal structure.
It's like we are enrolled in a kind of interactive hands-on science course, studying (at the most elementary level) the physicsof how the shape and size of random objects are affected by gravity and friction in their placement relative to each other. Where else but in dry stone walling can physics be broken down this way? By beginning to understand the workings of something this basic, for me at least, the universe seems more reliable, more predictable; not less magical or even less complex, but somehow just a little less intimidating, and a little more 'logical'.
By contrast, just imagine the scientific complexities engineers have to deal with in trying to formulate the physics of what happens when you introduce cement mortar to the mix.

Posted by John Shaw-Rimmington at 1:36 AM