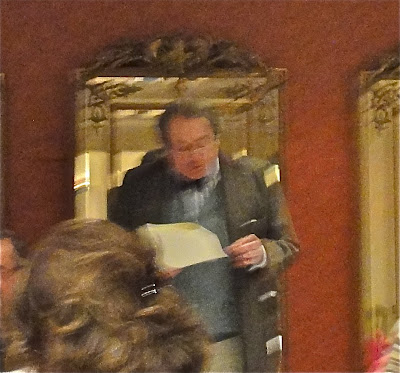 The DSWA of UK has been an inspirational organization for many of us in North America. It has been the model for much of what we have been doing here in Canada for the last 9 years, as we have endevoured to 'uphold' their walling standards and techniques as well as inviting skilled British wallers to attend many of our DSWAC events. We have also kept a close association with them in terms of bringing over competent DSWA instructors to impliment their Craftsman Certification Scheme as a standard for all testing of wallers who come to us to get their intermediate and beginner levels of accreditation.

May I say how grateful my wife and I are to be invited here this afternoon: it is such a pleasure to be amongst you again.
What a privilege it is to be in this spectacular part of England. I would also like to thank most warmly the Northumberland Branch for hosting this week end.
Speaking of privileges, I feel it is a genuine honour to hold an office in this distinguished association.
As I enter my third year as your president, I reflect perhaps with a twinge of guilt, that I have had only pleasure and interest from this Association and no hassle at all.
This is not always the lot of Presidents who are supposed to stay in the background until something goes wrong. I can tell you I have had my fair share of things going wrong with other organizations...but not his one.
Nor is this a matter of chance. Experience teaches us that everything can and will go wrong unless there are people who labour tirelessly and with utter commitment to ensure that things go right.
I think therefore it is right to salute those who not just give their officers an easy ride but who make and keep the whole association healthy and bring a sense of vitality.
At the bottom of your program appear the words "Keeping walling alive"; how brilliantly that aspiration has been filled.
Perhaps very many people can take credit for this state of affairs; it goes without saying that we are hugely indebted to the retiring Chairman Richard Love.
In the year in which so much has happened and with memories of a wonderful International Convention still fresh in our minds, I would like to say a tremendous thank you to the permanent staff.
To Allison who has, I believe been absolutely central to the success of the association and personally a great help to me.
Supporting Allison and again pivotal to the smooth running of the office at Crooklands are Helen and Shirley.
Our warmest thanks to you both....
One final thought.
Remembering the participants at the convention who seemed to range from hands-on dry stone wallers to poets and philosophers, I thought Ii would Google dry stone walling poetry; nor was I disappointed. Perhaps you all know this rhyme by Pam Ayers:
It seems to have an element of self-parody and went like this:

I should like to close on a rather charming observation of the poet Alice Oswald who compared her writing to the process of dry stone walling:- 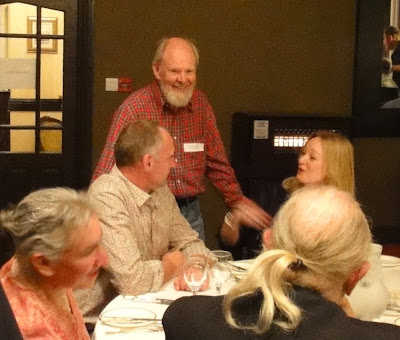 Norman Haddow talks with Andy Loudon at the recent DSWA AGM dinner in Otterburn.
Andy has just returned from a three week visit to Canada 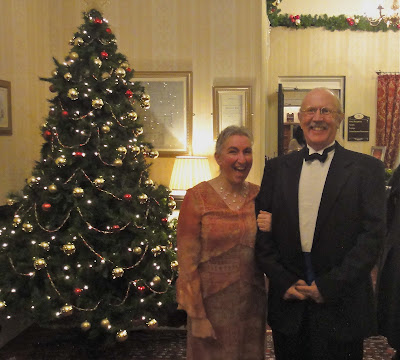 Later there was a special dinner to which some of the guests, like Sean Adcock and Brenda attended in very formal attire. Sean is the president of the North Wales branch of the DSWA and publishes an informatiuve quarterly magazine dealing with just about every aspect of dry stone walling around the world called Stonechat. I hope to do a special article about him and the magazine in an upcoming blog entry.

Posted by John Shaw-Rimmington at 1:35 AM