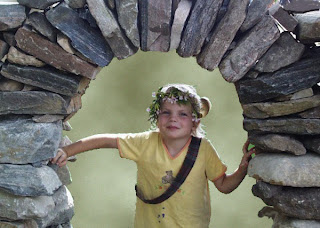 I always thought that the Romans invented the arch. I was wrong.

Some time before the Romans,  the first true arch was discovered, or should we say invented. The arch proved to be a huge quantum leap over the earlier post and lintel approach to spanning openings. The corbel vault with a similar arc shape and principle, but quite different from the proper fanned arch, was perhaps an intermediate step. The challenges of corbelling over wider and wider openings may have led to the discovery of the arch. No matter how it happened who ever came up with the first arch changed the course of architectural history.

Contrary to what people think however, it wasn't the Romans who discovered it. Examples and evidence of arch structures have been found in earlier civilizations, beginning with the Mesopotamians. The Egyptians also constructed arch vaults to roof the tombs they built.  Then there were the Greeks who utilized the arch idea now and then but only in very simple structural applications.

It was not until the Etruscans came along that the arch became a practical element in some of their early 'monumental' architecture. One example is the Porta Augusta, where the idea of the arch was refined and merged with Greek elements.

The Romans took this knowledge and developed it further and did some amazing things with it. They invented the idea of setting an arch on top of columns or abutments to span wide walkways and decorative entrance openings. They showed off and used it brilliantly in a number of their buildings. The Romans developed the arch also to be used for the very practical purpose of building bridges and aqueducts. 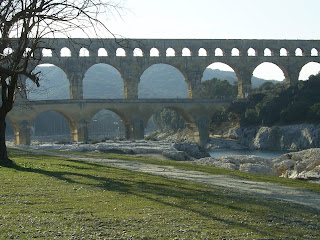 Pont du Gard in France built by the Romans
Posted by John Shaw-Rimmington at 1:30 AM