A civil wall battle and the death of Stonewall Jackson 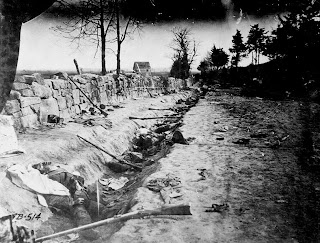 The Second Battle of Marye's Heights (Fredericksburg) took place here on May 3, 1863.

Two related battles were fought nearby on May 3 in the vicinity of Fredericksburg. The campaign pitted Union Army Maj. Gen. Joseph Hooker's Army of the Potomac against an army less than half its size,Gen. Robert E. Lee's Confederate Army of Northern Virginia.

Chancellorsville is known as Lee's "perfect battle" because his risky decision to divide his army in the presence of a much larger enemy force resulted in a significant Confederate victory. The victory, a product of Lee's audacity and Hooker's timid decision making, was tempered by heavy casualties and the mortal wounding of Lt. Gen. Thomas J. "Stonewall" Jackson to friendly fire, a loss that Lee likened to "losing my right arm."

That same day Maj. Gen. Jubal A. Early was defending Marye's Heights in Fredericksburg, Virginia, with the Confederate army's reserve artillery and a small infantry force of about 10,000 men from his own division and Barkdale's Brigade. Much of his force was spread out thinly to the north and south of the Heights. Maj. Gen. John Sedgwick, reinforced by the II Corps division of Brig. Gen. John Gibbon, moved their soldiers through Fredericksburg and towards the plain below the Heights, then stopped and engaged in long range artillery fire with the Confederates for most of the morning. At about noon, after failing twice in previous attacks, Sedgwick sent ten Federal regiments against Early's defenses, the 5th Wisconsin in front as skirmishers.

The 5th went forward with a cheer, the other regiments close behind, and they were met with concentrated fire from the Confederates waiting behind a four foot dry stone wall. The charge stalled there for a time, then portions of the Union right found their way through nearby gardens and fences and climbed over a portion of the stone wall, then poured enfilading fire into the thin Confederate line on the left flank. The Federals charged in, bayoneted the closest defenders, and captured several enemy guns. The greatly outnumbered Confederates withdrew and regrouped to the west and southeast of Fredericksburg, and though it took three charges, Sedgwick's men finally captured Marye's Heights.

About 2000 soldiers died at the second battle of Fredericksburg.

Much of this information was gathered on Wikipedia.
Posted by John Shaw-Rimmington at 3:00 AM